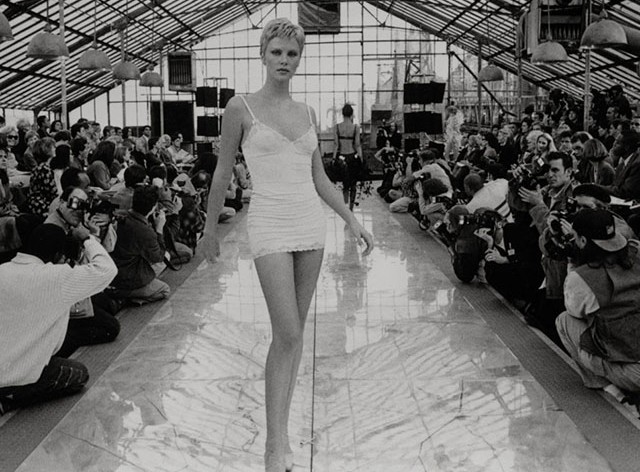 O.K. so naturally the radiant Charlize Theron’s comments are being made fun of.

After all, the statuesque, sparkly-peepered woman said this in an interview with British GQ today:

Jobs with real gravitas go to people that are physically right for them and that’s the end of the story. How many roles are out there for the gorgeous, f***ing, gown-wearing eight-foot model? When meaty roles come through, I’ve been in the room and pretty people get turned away first.

Let the eyroll sequence commence for anyone out there who does not look like Charlize Theron. But if you read closely, it actually lays bare the fault lines of Hollywood casting. Maybe no one will be holding a candle for the opportunities Charlize missed because of her overhwelming attractiveness. But all of the predictable coverage of this statement does gloss over one thing.

It isn’t just silly that the formidable actress can’t do the parts with the really deep dives, or that all the poor, unfortunate hot people are asked to GTFO when it’s a substantial part. The totally out of touch thing is that Holllywood continues to tell us that when a fake person is having an endless rough day, the actor must be “relatable.” And so actors like Charlize have to un-perfect themselves.

Everyone makes fun of the idea that a woman has to “be bold,” and make herself look homily or possess less modelesque features in order to play a troubled person. No makeup and tired eyes ARE fitting of an addict like on Love, and a drained look might make sense when a woman’s playing someone who is coping with a disability like in Still Alice, or when you’re playing someone real like in Monster who looked less shiny than you.

But it’s even sillier that movies are still selling the story that the objectively Hollywood-looking people are the only people who get to experience the sensation of joy. There’s always going to be the dissonance between the experience of the hot girl lead and the less striking friend, the “pretty sister” in Love Actually, and the one who’s destined for a terrible life because she doesn’t look and dress as nice. Also silly: when women wake up without a hair out of place and fall into hilarious success, as our girl Alia has pointed out.

Certainly it’s lame for Charlize to miss out on roles if it’s not a requirement that the character look a certain way. She is absolutely scooping up advantages that other actors (marginalized ones who are not conventionally in-line with what Hollywood considers acceptable,) would enjoy a crack at her parts. But it’s still odd that you can’t be too conventionally screwable if you want a hard role. If we take Hollywood reality seriously, tall people supposedly have it so much easier? Screenwriters just need to kill the narrative that only less good looking people are believably deep, poignant or dark.

And all of this coverage having a field day with the fact that Charlize, who GQ says has “superhuman” looks, glosses over this tidbit she imparted:

“We live in a society where women wilt and men age like fine wine. And, for a long time, women accepted it. We were waiting for society to change, but now we’re taking leadership. It would be a lie to say there is less worry for women as they get older than there is for men… It feels there’s this unrealistic standard of what a woman is supposed to look like when she’s over 40.”

Wherever her more widely covered complaint sits with you, this woman has been rushing to a runway modeling gig in a gold dress for years, and that may be her best role. Seriously, that Dior commercial was on forever.