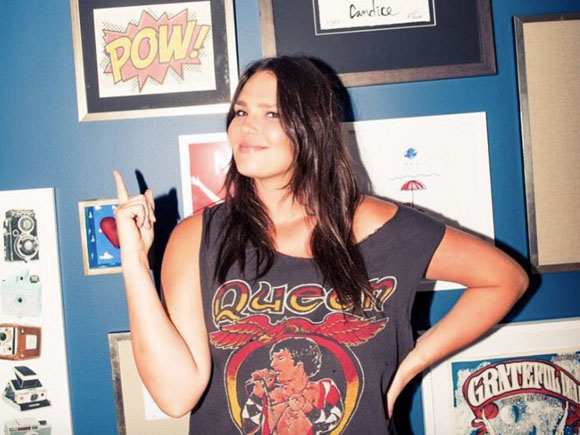 It’s going to be a beautiful spring.

Candice Huffine has been signed to IMG, WWD reports, which is an appropriate development in the bombshell’s career. Her babealicious looks and her unshakable determination have already afforded her with a lifetime of shiny achievements from Vogue to the Pirelli calendar.

In a recent essay, she wrote for her client Rachel Roy’s blog, she revealed details about when she was starting out in a far less size-diverse 2000.

I signed my first contract in 2000 when I was just about to turn fifteen years old. I was desperate to be a model, but not desperate enough to do something extreme to my body to get the deal. I was clueless to the fact that plus modeling existed at the same time I was seeking out modeling agencies who had no such division. I was not clueless to the fact, however, that I was a curvy young lady with hip measurements that would most likely never decrease in numbers. I’m no doctor, but I knew there was no way I could move bone. Losing the twenty pounds asked of me at the time and whittling down to the ideal model measurements of the early 2000’s was not in my cards.

So no, a body type is not a choice despite what Snoop Dogg and others might preach, Candice has confirmed. A size 12 is not optional for her the way that extra guac is or pants are when you’re Bridget Jones.

People wondered if the inclusion of curves were a fad or something a magazine would do for shock value to get the masses talking. I never saw it this way. Blame it on the ability to always find the silver lining, but I saw this as our beginning. It was moments like these that made me, a young but confident model, know that we could do big things in this industry. The door had been unlocked.

She goes on to list a catalog of her endless sexy editorial features along with the mic drop moment, THAT calendar. Throw in a shout out to Hari Nef, Jillian Mercado, and Nicole Griffin for shaking up the standards too, and this is one inspirational Candice address.

Thank you Candice, for this book report on how wonderful you are, and thank you especially for recommending inclusively sized shades for this bright inclusive future in fashion. Read everything written by this dreamboat here.