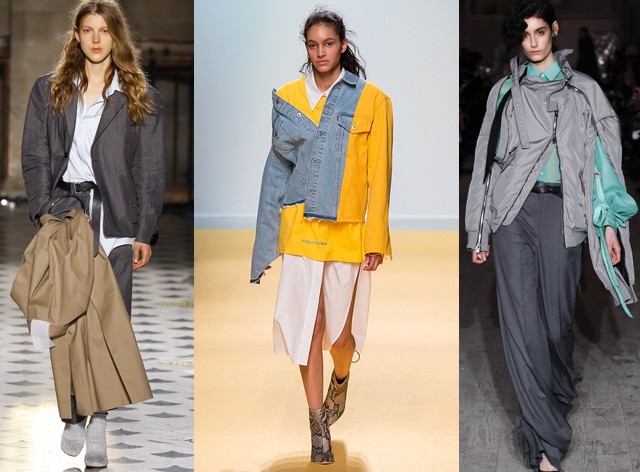 How to Do the Over the Top Layering As Seen On Runways Like Vetements and Project/Y
by Ashley Hoffman | April 4, 2016 at 10:15 AM

Typically, layering means throwing a jacket or one top over your other top in case things warm up.

But loads of designers have been getting extremely layering-happy, and they’re throwing on an extra piece or five on top of looks that would be totally fine on their own. It’s because three articles of clothing is insufficient when you’re making a statement about being practically disheveled. Think of it as Coco Chanel’s stern advice to take one thing off before you leave the pied a terre for the morning rave, but in reverse. Here are some designers who have been very into putting MORE CLOTHES ON CLOTHES ON CLOTHES.

Balenciaga’s new creative director, Demna Gvasalia made everyone look like very independently wealthy college kids who rolled out of bed and into many different pieces at Vetements. One model wore some sort of a extra pant leg pouch fit for a kangaroo baby, plus her belt wasn’t all the way on. Talk about Margiela. And Kenzo, Hood By Air, and the always experimental Jacquemus all recently showed looks that were heavily layered and terribly fantastical for the everyday real world.

Take for example Kezno where a collared shirt that’s a statement piece on its own showed up with a whole additional embellished dress over it. At Project/Y we saw an overcomplicated sea of athleisure, zippers, pockets, which made the model look like she was wearing a hybrid spacesuit. Jacquemus combines a bunch of different things, gallerina kimono, a blazer for smoking pipes, and gogo-ish boots appropriate for starring in Rent all in one look. And at Off White, most of her denim thingamabob, was decidedly missing for maximum DGAF tude. It’s a look that says I’m so incredibly casual and rock and roll that a polished outfit only makes sense for tightly wound people, and is therefore too boring for me.

We get that none of these runway looks would fly in real life. We also know a sweatshirt dress from Reformation, so you can wear your fave thing without pants is the easiest, but here are some ways to borrow from the kinds of OTT layering on the runway.

To get your haute slacker thing going, top things off with a light long-sleeved shirt under a dress, and then you’re instantly doing a schoolgirl thing. And think beyond the plaid sweater around the black dress or jeans. Kurt Cobain would love a flannel, but you can drape anything there as long as it stays put. Tie a bomber jacket, a sweatshirt, a sweater, a low-slung bag, a windbreaker, or a skirt over your trousers of shift, and all of a sudden you’re multi-dimensional, and so much less fussy looking. Total subversion.

Wear your teetering coat over your shoulders if you don’t mind the hassle of keeping it there, wear your overalls with only one snap strapped in, and throw your lightweight jacket on top of everything. Don’t shy away from the voluminous stuff either, and luxuriate in wearing things loosely. Starting with a tee as your base is the best tack. Then you can go camisole, sweater, bomber, blazer, or a collared shirt and a dress. More is more. We’re not sure about the loose belt though.

Are you into layering, rioters?