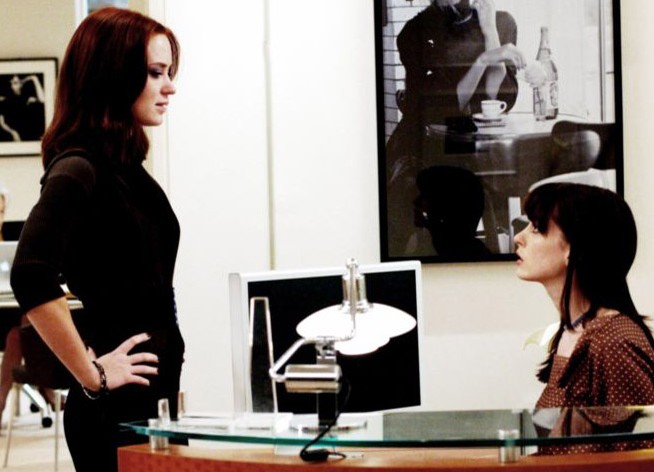 Why I Refused To Tolerate My Old Fashion Colleague’s Body Shaming When I Met Her Again
by Lindsay Peoples | March 31, 2016 at 3:51 PM

When I started working in fashion during college, I was as green as one could be. I’m from Wisconsin, where Kohl’s is considered expensive and everything I learned about the fashion world came from my love of magazines and reading about it as if it were in a far off fantasy world. All of my internships I would basically describe as professionally schlepping—hauling ten pound garment bags on the subway, working late nights, and hoping that one day just maybe I would get to make my mark.

I really didn’t know what to expect with each job—every boss had a new ego, every magazine was run differently, but from the beginning, I recognized the politics and the pressure that would never go away. My mind always takes me back to the times in middle school when I started religiously collecting magazines, and continued to see a pattern of people included and diverse individuals left out of the storyline. I knew that I loved the intricate process of making clothing, and reading about how designers culminated a brand, and had an ambitious nature to really bring diversity to the industry but it never occurred to me all the emotional baggage that would come along with the opportunities before me. My vision was to add the pieces I thought were missing: a sense of realness and diversity that I had yet to see in my peers and in the industry as a whole.

During my first couple of jobs out of college, I realized that the fashion industry was a completely different world than what was just on the pages of the magazine; especially the people. Recently, I saw one of those colleagues walk past my table at a restaurant seemingly carefree as always, and it brought up a whole pot of feelings that I still had. Since I am a Midwesterner, I’m just naturally thoughtful, giving and believe in the phrase ‘if you don’t have anything to say, say nothing at all’ but when I saw her I instantly regretted not saying some of things I needed to say to her way back when.

When I met her, she was pretty much like every other fashion girl I had encountered—rich, diet-obsessed, avid traveler to chic international destinations, obsessive shopper and last but certainly not least: nothing like me. When I say nothing like me, I’m referring to the fact that I had no connections prior to being in the fashion industry, I didn’t have someone paying all my bills while I worked endless hours for less than minimum wage, and no, I couldn’t afford to wear a runway look from the Chanel show.

We were both working for a celebrity stylist, she had the team manager role, and I was doing the normal errands, picking out market that would be good for clients, and putting out fires. We spent every day in the office from 9 in the morning to 2 in the morning making sure all the loose ends were tied up. I quickly learned that she really only cared about one thing: fat shaming. I cannot even tell you how many times she brought up her weight, my weight, how she thought she would look in runway samples, asking if I thought I could fit into some of the samples. Whether we were checking in clothes, or looking at a show, or taking a coffee break she always found a way to bring up size.

She would hold up a sample and say, ‘Do you think this would fit me? I probably need to drop a few for it to look good’ or my personal favorite ‘Do you think that block of cheese trick in The Devil Wears Prada actually works?’ She had great style, she knew the right designers to wear, stayed away from the tacky label-covered designers and had a knack for putting things together. But by the end of the first week of working with her I felt that if I had a penny for every time she said ‘if only’ about someone else’s looks in the office I would have been as rich as her investment bank father.

Her obsessive dieting tips and politely put together sentences about what other people should be eating always made it seem like she was just trying to help but really just talking too much. She would say, “You know if you got up a little early and went running with me, and only ate this broccoli today you could drop a size so fast.” I know what you’re thinking—why would you work in a place like that and why would you let someone talk down to you. The simple answer is that in fashion, you can be easily replaced. More so than in other industries because here in New York, there’s so many people just dying to get a foot into the door. If you don’t want to work crazy hours for no money, guaranteed they will find someone else in a heartbeat.

I knew that if I complained to higher ups I would only be making a fuss instead of making a name for myself. When you’re not the boss or even close to it, it’s hard to find your voice. So every time she would make a comment, instead of starting an argument I would internalize how disturbed I was by her comments, chuckle, make a joke about how crazy she was and try to get back to work. The previous summer I had worked in a fashion internship and saw multiple girls leave and go on what we called a ‘summer break’ but was really a stay at an eating disorder clinic. I knew I didn’t want that to be me, and knew that I just had to keep my focus on my passion for fashion and how it could bring about change instead of dwelling on the toxic people and pressures.

Trust me there was no one happier on the face of this earth when I was able to move on to my next job. So when I saw her this week at the restaurant, it surprised me that months later, I still had these feelings of resentment towards her. So when we started to casually catch up and she mentioned that she was only eating at Italian restaurant because it was her cheat day and asked if it was my cheat day I decided to do things differently by firmly replying no. I could feel her itching to talk about her new diet fad, or how great she looked but I as I sat there content with my bowl of pasta on a non cheat day, she could tell that I just wasn’t in that headspace anymore to listen. No better time start speaking up for myself than now.