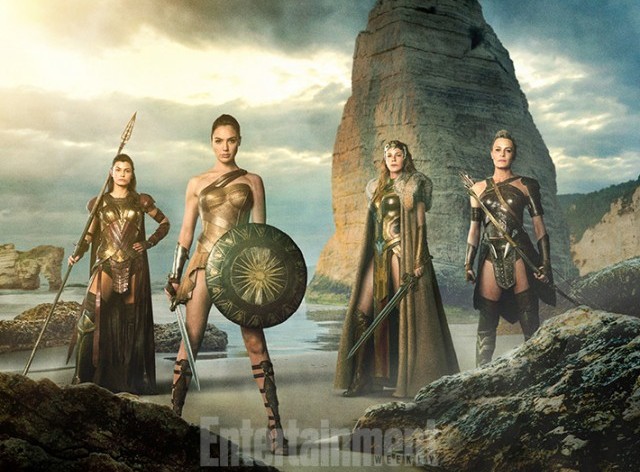 Director Explains Why Wonder Woman Is Still Wearing Hot High Heels While Fighting
by Ashley Hoffman | March 25, 2016 at 8:59 AM

Let’s talk about superheroes who will refuse to let hot footwear get in the way of extreme physical activity.

The pictures of Wonder Woman’s origin story for Justice League, due out in 2017, are out in Entertainment Weekly.

It’s a battalion of megahot female supersheroes (Gal Gadot as Wonder Woman, Connie Nielsen as Queen Hippolyta, Robin Wright as General Antiope, and Lisa Loven Kongsli as Menalippe,) and they’re all looking formidable. Wonder Woman’s at the center of it, appropriately, and boy is she wondrous.

The images of these broads look baetacular as ever, and the women who are training her in the movie wear ridiculously tough, Grecian looking armor, capes, and metal loin cloths. (Classic Wonder Woman wore boots, golden head gear, and a patriotic bodice, and there has been much chatter about why her getup should not be any more skimpy and sexualized than the Batman or Superman.)

But as Entertainment Weekly puts it in response, “Themyscira is a hidden island where Amazon women of Greek myth have thrived for centuries, living in harmony and free to self-govern away from the gaze of man.” Apparently, they’ll be doing all of this justice serving in some wildly practical heels, but the warriors get to wear flats for the “heavy fighting.”

Female director Patty Jenkins (who worked on the costumes with Linda Hemming,) explained the impractical footwear to Entertainment Weekly this way:

“It’s total wish-fulfillment. I, as a woman, want Wonder Woman to be hot as hell, fight badass, and look great at the same time – the same way men want Superman to have huge pecs and an impractically big body. That makes them feel like the hero they want to be. And my hero, in my head, has really long legs.”

When a female protagonist “wrecks it” in heels, people don’t love it. Instead, some view this wardrobe choice as distracting, foolish, and implausible. Others don’t mind, as it is after all a fantasy, and a totally implausible one at that. Either way, it’s pretty feminist that she has her own standalone flick.