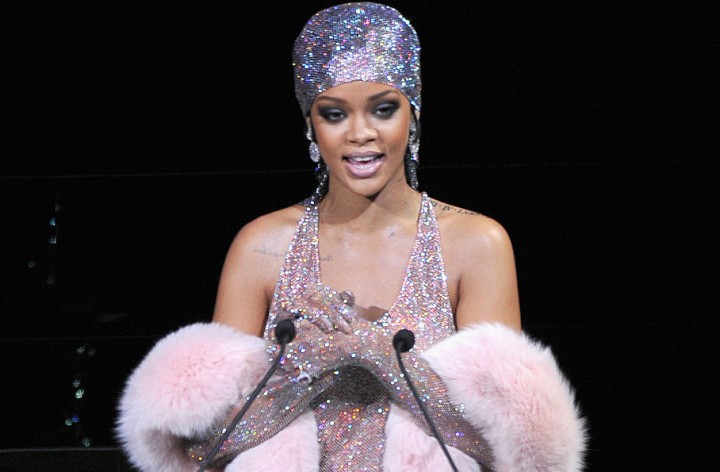 Rihanna’s Statement About Going Braless for Fashion Proves Women Aren’t All Undressing for Attention
by Ashley Hoffman | March 24, 2016 at 9:42 AM

Everyone is incapable of forgetting the gloriousness of Rihanna in that glittery Adam Selman body stocking and matching cap the night she was honored at the CFDA Awards.

And everyone also assumed this was a gigantic wink to the nipple police over at Instagram HQ — which was of course then flooded with images of everyone’s favorite style muse with her nips out. The look won the night, it was so beautiful on her, and as she said, fashion should be FUN.

So was it all for free the nipple, the worthy cause for women’s breasts to enjoy the same equal treatment in the sun as a dude’s (For more on this, see our interview with Lina Esco, director of Free the Nipple.)

Rihanna tells Vogue that in fact, it was simply the right move for the delicate dress.

I have always freed the nipple. It was never to get attention. Never sexual. Never in desperation. The bra just f*cked up my sheer shirt. I just wanted to be perfect and that’s what I went with and I felt okay with that. And after a while, it became such a scandal and a “horrible role model” thing. It was a topic of discussion, and eventually other girls started defending me. And now there’s this whole “Free the Nipple” movement.

Everyone should read that because no matter how much attention breasts garner, what everyone else decides they’re about, isn’t actually what the woman thinks about. So when you tell a high school student that her prom dress is way too low-cut — well a higher neck would actually ruin the entire look. That’s what people still aren’t getting. No, the purpose of wearing something or not wearing it isn’t all about that attention — media or male. We’re not all slurping that up like it’s chocolate pebbles flavored milk. It’s an outfit.

Regardless of all the motives she may have had to do whatever she wants with her body and her body pride, sometimes concealing ourselves just doesn’t make fashion sense. Sometimes a woman just wants to feel cool, like herself, not constricted, and it has zero to do with everyone else’s eyeballs and assumptions.

But CFDAs was the last time that I did that. I remember saying that day to my stylist and everybody in the room, hair and makeup, everyone—I was just like, “Now you see it. Tomorrow you won’t.” Because this is the last time. I can’t go any further than this. I’m barely there. So I said, “From here on, we’ll be back to clothes. Let’s just put clothes on. Even if I don’t want to. Make sure I put clothes on.” Because I don’t want people to think that I’m doing this on purpose.

So she’s back to clothes, you know, sometimes*, because of fear over what “everyone” else thinks. SEE WHAT EVERYONE DOES. Anyway, she looks amazing in everything she wears, because she’s just as at home in sweats. Go ahead and tell us she was trolling someone or she needed more attention than all the well-deserved attention she already has, but really, wouldn’t a bra be a bit strange with a naked dress like this?