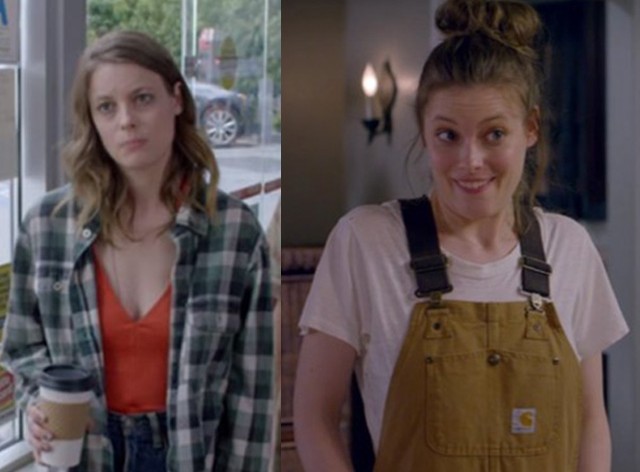 Love Ditching the Myth That Women Constantly Wear Makeup Is a Refreshing Dose of Reality
by Ashley Hoffman | March 23, 2016 at 1:47 PM

Unnecessarily lashing out at a nail technician and ruining a romantic magic show are all in the zone for Mickey (Gillian Jacobs,) on Love, the show people are currently binging.

But of all the double birds she throws up at conventions like obliging when someone tells you take off your socks and slides before you enter their precious house, one that stands out is her choice to not wear makeup.

The Judd Apatow series serves up realism in MYRIAD ways, except for the fact that Paul Rust is maddeningly irresistible because he’s not a raging asshole. But for nearly all of it, Mickey’s face is presented without a trace of life-improving cosmetics

Of course, Gillian Jacobs is objectively attractive with her red lipstick and without, but the way the show treated her look was really. The last time I saw someone this consistently with this little makeup in Hollywood, it was in Orange Is the New Black because makeup is illegal when you’re in prison, or that time when Kate Winslet contemplated suicide in a cottage in The Holiday. (This is of course excluding, actually crazy, murderous characters who skip their beauty routines in horror films for the added fear factor.)

On the show, Mickey’s having a rough time. She has impulse control issues, even though she’s still making a go at it on a ridiculously patronizing radio show. One of the only times we see her with makeup is at work, at the bar with red lipstick, briefly, and on her fancy date, which makes her promptly implode. It’s all decidedly light, and she clearly feels most at home when she’s not “trying” to be attractive in the stereotypically feminine way. But more often than not: she’s all eye bags, blushless skin, and all other things that naturally occur on faces when you’re a human woman. It’s dope.

Seeing her — constantly – at least looking like she’s not wearing a stitch of makeup is a surprising delight like a Seamless discount, at a time when people still treat women in the media who dare to look like themselves like it’s an act of bravery on par with cresting a mountain.

Obviously the way Jacobs authentically reveals the character’s cracking layers of toughness through random acts of stalkery-ness is much more commendable than the show’s decision to let her appear in public without foundation. But when we’re drowning in female characters “having a rough day,” with ombre eyeshadow, Love’s makeup-free Mickey is one of the most exciting authentic things on the show.

It’s possible to focus on all the other realistic portrayals of a single woman rather than the fact she DGAF about undereye concealer, but there’s a delightfully screw you decision to do that. Simply put, women without their makeup are as important as sweatshirts are to Kanye and the world. What would be even better? More women telling the contouring brushes to shove it wen they’re not hitting rock bottom on Ambien at a non-religious cult. Just, you know, without it at all while they’re living life.

Let’s see more women who aren’t endearingly tanking their lives going makeup-free. That would be in touch with reality, where it’s always preferable to exist even on Netflix.