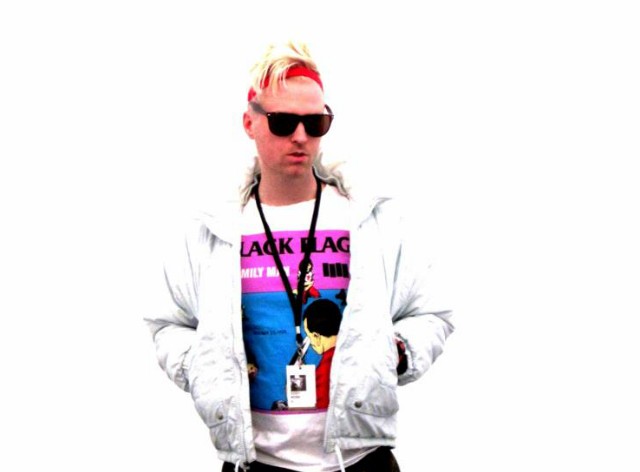 “I’m on my bike so I can get anywhere pretty fast,” Cody Ross texts me an hour before we meet at the Ace Hotel. He says he’s exhausted and points to the bags under his eyes, but you wouldn’t believe that. The fast-talker has an animated energy, and it never lets up.

It’s the afternoon and so far he’s already pedaled up and down the city on his hybrid street bike. He’s been taking meetings before he flies to China to look after the production outside Shanghai for Cody Ross, (formerly Priestess NYC,) his womenswear and unisex label.

The designer gathers unlikely aesthetics and braids them together, pushing the clothes into conflicting territory. His style is distinctive: winking asymmetry and explosive visuals. Here’s a sampling organized from lightly eccentric to crazy: a lambskin leather top that looks like cold metal, a thrashed shirt that recalls Sid Vicious and Carnegie Street in 1979, and a dress modeled after the contours and missile systems of CIA predator drones. Imagine what the freaks in Escape From New York would steal if they had faux fur access and you’re in the zone. His label has roped in a modest following that’s growing incrementally. He sells at Collette in Paris and Hotoveli in New York.

I’m surprised to see him in a purple polo. He looks like he’s about to scream “cowabunga” and pound back a case of Mondo. A headband pushes his defiant natural white blonde hair back making him look like a cool electrocuted cartoon. He’s wearing a Nike butt pack. His collar’s popped.

“My family thinks I’m a wannabe oddball weirdo artist,” he says in a cheerful voice, “I’m just a simple person trying to express himself creatively. I’m not trying to be some huge name or something. I’m trying to have fun and make cool stuff. It’s just my own subjective approach to like fashion and fun.”

Sewing machines and rows of clothes fill his 600-foot studio. A unisex jacket reinterprets the tailoring of ‘70s military tank uniforms, and he lined it with prints like a fractal pattern of the sperm’s journey, blowfish, syringes in technicolor and cartoony weapons. “Combat is on everyone’s mind. There are shootings every week,” he says. “We’ve been at war for 14 years so it’s always in the subconscious. It’s also really functional.”

He’s still thinking about the stickers outside the hotel and how to import the look of them into a print. That leads to him telling me another boutique hotel in Shanghai that was covered in Norwegian quartzite tiling. Weaving sparkly stiff fabric together, he worked cloth into optically jarring garments to look like the tiles. “It turned out really cool. It’s almost sparkly.”

With every piece he creates, there’s his humor, and it’s provocative. He’s used pelts and strips to make armbands that looked like duct tape. “Bondage, but in a fun way,” he says.

Cody’s all adrenaline and he has a by-the-bootstraps mentality to getting things done. “Everything we’re doing all the time is DIY work…getting to midtown, weaving and dodging traffic, trying to be risk averse, running your on website e-commerce hub, doing your own organic marketing. It’s all a DIY self-push.” He doesn’t do seasonal collections, because it works better for him that way. “Then there’s nothing left over.”

But he’d much rather discuss international affairs. After China, he’s excited to go down to Vietnam to invest in property in between eating elephant ear shrimp and drinking good coffee. “When they’re not burning down Chinese storefronts, they’re really cool.”

He’s rare for a designer. Cody’s drug-free, and he goes to bed at 11p.m. every night. “I just drink Prosecco and I ride my bike fast.” His outfit is conservative because he’s meeting with finance guys. “You don’t want to go to Pricewaterhouse in a sliced up t-shirt. They just think it’s weird.”

As a finance refugee, he’s at home on Wall Street though. His voice is as energetically charged as his hair when he talks about chaos theory and partial differential non-linearities, explaining how the numbers apply to the fashion industry. He got this money-savvy long before he started rushing to produce what he calls “nextness” in fashion. “The markets are filled with paradoxes so they get it.” He still manages a portfolio for people close to him, and he’s focused on technological processes to make his system more efficient. He trades stocks and options often, so he printed data and stats into graphics for garments in digital print, cutting the garment to emulate the blotter.

Ross learned pattern construction at Central Saint Martins in London. That’s how he picked up the technical engineering to turn his rebel abstract narrative into clothing. “It’s not political in any way, but certainly it’s about subverting convention and orthodoxy, and delivering some kind of cool critique to make it better.”

I force him into a photo booth before he has to leave, and he messages me later to talk about the inspirations he forgot to mention, and a few more of his favorite freaks. He says, “u r grrrrreat interviewer! hang soon!” He’s still full of energy.

Related Links:
Behind the Scenes with NYC Drag Kings