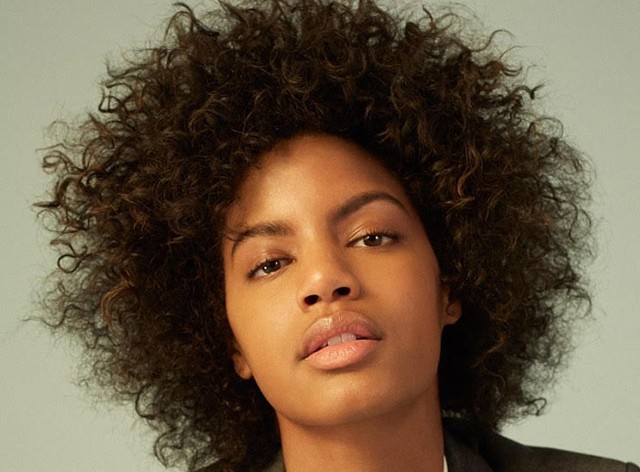 Ebonee Davis on Why Stylists Still Need to Learn How to Do Natural Curly Hair
by Ashley Hoffman | March 21, 2016 at 8:50 AM

Ebonee Davis, 23, has been spinning and karate chopping into the spotlight. And there she was in a blazingly bright orange two-piece in Sports Illustrated’s swimsuit issue–maybe you’ve heard of it. Lately, she’s gone from someone people look at to someone more people listen to. No, her career is not all stunting on a rock in Punta Cana. On top of her commitment to making this modeling thing work, the hyper socially aware and deeply introspective model is involved in a summer reading camp called Honeybees for high-need elementary school girls, (funding pending.)

She made the time to speak with RunwayRiot about why wearing a weave does not make her any less “woke,” how hairstylists still need to learn how to address curly hair, and why no one can demoralize her for posing nearly naked.

That photo of you in teen Vogue I saw today was definitely a power move. What can you tell me about that?

It was one of the first publications that I’ve been featured in wearing my natural hair. I’ve been wearing my hair natural since the end of last year. Now it’s getting some popularity, and the response has been really great. It was a fun shoot. There were three models in tomsuits as an alternative to the prom dress. Ultimately, the purpose of that shoot was to show alternative styles people are not used to expand the idea of beauty and what’s expected.

Cool thing to show for girls in high school. What did you wear to prom?

That’s a popular one. Based on what you just said about your natural hair, I’m going to read back something I saw you write on Instagram the other day: ‘Because sometimes I want 32 inch Brazilian. And I’m no less “woke” than I was before.’ Can you talk a little bit about consciousness and hair?

Absolutely. Basically, the caption of that photo is about how sometimes, I want to wear a weave that’s down to my butt and within the African American community, we put limitations on ourselves and we try to label each other. The idea that someone is more conscious and aware..when we see someone wear their hair natural, it’s accompanied by images of well-spoken women and that eliminates room for anyone who looks any other way to be considered conscious and aware. It’s a stigma wrapped around us as black women, that if you’re wearing your hair in a weave, you’re emulating European women or you have self-hate, but really, honestly sometimes when I have my hair down to my butt, it just feels good. That doesn’t mean I love my afro any less. 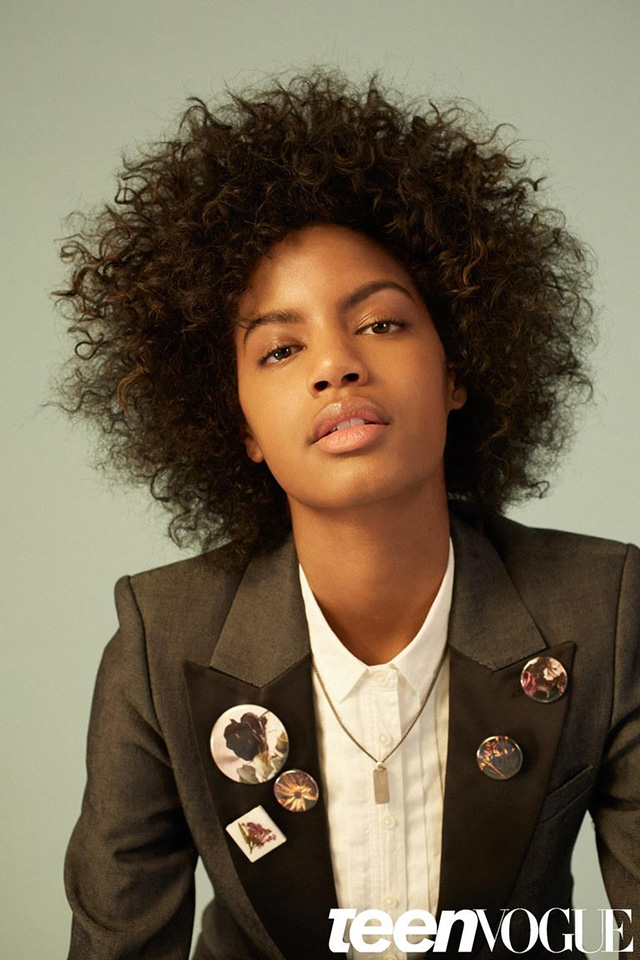 Photos by teenVOGUE by Stevie And Mada

Interesting answer, can you expand on that? Little by little you see it more in the media, what’s the danger of putting a self-hate label on someone who doesn’t go natural?

Definitely, especially with the emergence and acceptance of natural hair in the media, African Americans can create this separation about who loves themselves and who doesn’t, and it’s ultimately defeating the purpose of being an advocate of natural hair. The point is to see we are all accepted we are all beautiful. When you make categories within one race you’re furthering the damage. 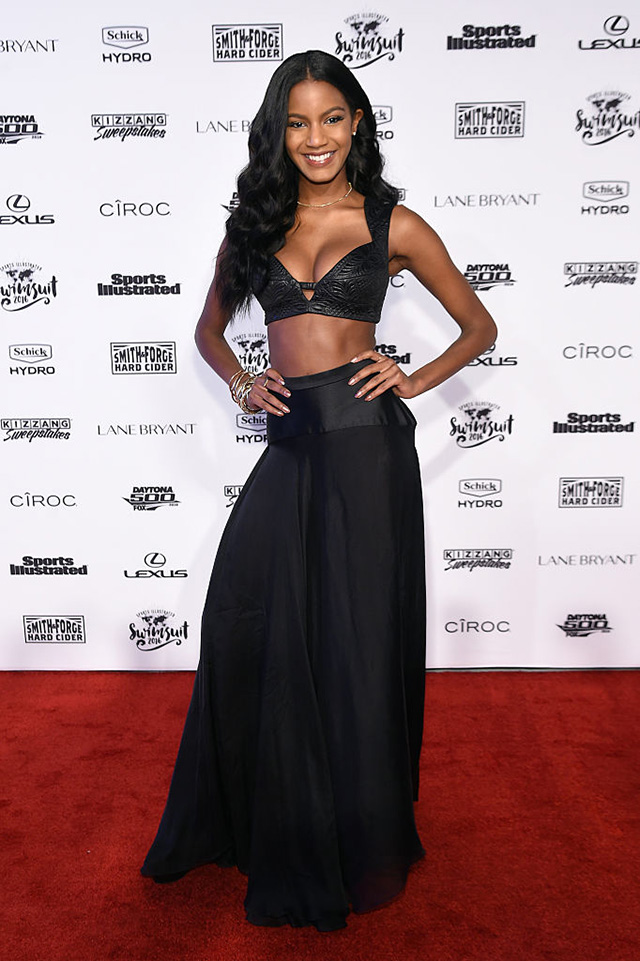 And as a pro model, how do you feel about how hairstylists have been prepared for your hair?

I think generally, I’ve been pretty lucky working with great hairstylists and makeup artists. There have been times when I’ve felt uncomfortable. I’m 23, and I’ve lived with my hair situation. If you’ve just met me, as a hairstylist and you are telling me you know exactly what products, what type of iron and how hot it needs to be…I’ve been doing my own hair and I’m knowledgeable as an African American. I don’t want to be known as a Naomi Campbell, to be the b*tchy one who has an attitude so sometimes, I have found myself being quiet at times when I felt like maybe I should open up now when I make suggestions.

What kind of suggestions would you make?

Recently, I’ve been wearing my hair curly and there’s not a lot of maintenance. For the most part it’s a self-styled look, but sometimes people are aggressive with it. I think it’s like if my hair was bone straight, you wouldn’t stick your hand in and shake my head. They feel like they can go in and pull and pick instead of being gradual and delicate so I think some shift needs to happen with the general handling of African American hair, and you don’t need to put the iron on 450 degrees if you know what you’re doing.

Just general knowledge in hair care beyond styling. With styling, you’re achieving the look, but hair is long lasting. If there’s just a stylist manipulating it, the model can walk away with two strands and a full head of damaged hair. I’ve talked to plenty of people who say that in cosmetology books, there’s maybe one page in the books that they read on African American hair, and that’s crazy to me because it comes in so many varieties. People should take the time to understand, go back to school, and do their own research on what works and what doesn’t for curly hair. Most of the girls you were dealing with had weave, so this is something different.

It is so strange how delayed it is. And we’re RunwayRiot, so we have to ask, how do you feel about your body?

I’ve never really had an issue with shooting nude or in bikinis. I never felt like my body was something to be ashamed of. At times, I have felt an internal conflict. I feel comfortable being naked, but people are going to take that and try to associate it with who I am as a person and demoralize and devalue me, and that’s why I appreciate giving an interview to speak on it because then, people can’t make assumptions because your words are out there. I’ve gotten negative comments on Instagram, like “you’re just stupid, you’re naked, you’re a whore.”

It’s just a function of what society does. A lot of times it’s men and the next day, they say, ‘oh my god, you’re gorgeous keep showing your a$$’ or whatever. That’s not a compliment either. It’s just as degrading as whore because ultimately you’re objectifying me. Society teaches men and what they think is appropriate to say, it’s a reflection of society.

But you get people loving what you put out there too. How do you think they feel toward you?

Yes, people compliment me and I get positive feedback. I don’t know, I guess they admire my body and things like that. I definitely get positive feedback on my hair. It’s an interesting dynamic over the last year. It’s transitioned from a lot of male followers to a lot of women of color who sort of look at me as aspirational and who agree with the things I have to say about natural hair. I feel like a leader. 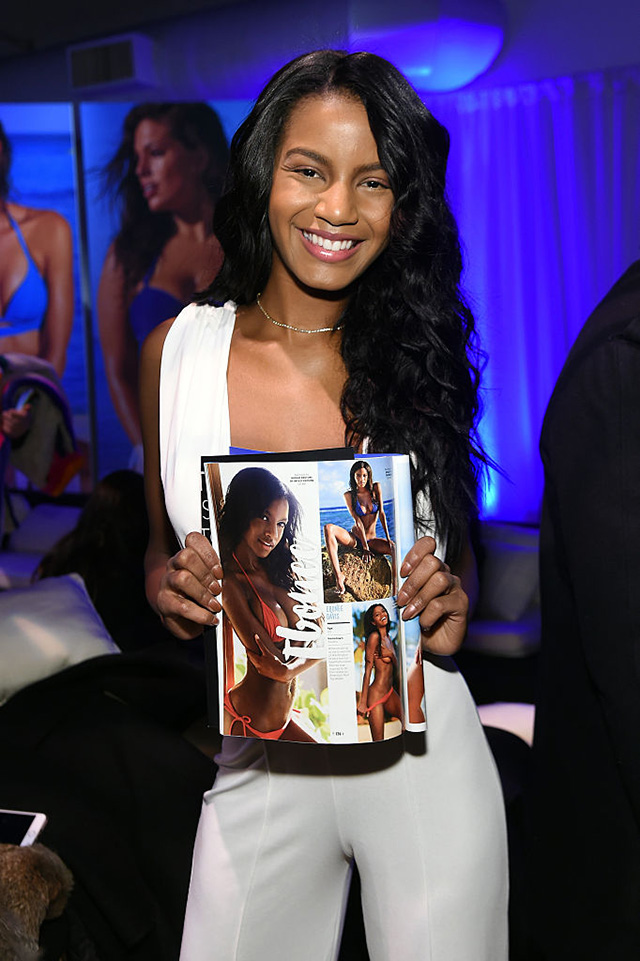 And you were featured in Sports Illustrated, that’s quite a milestone. What was the response like?

The response has been amazing. I am transitioning from being just a model and just a face to a full round person, like doing this interview. People are going to see my words and people are going to read my words. It just makes for a fuller picture beyond physical appearance.

What do you think it is about modeling in particular that makes it important for you to have a voice?

I think people make the assumption that ‘she’s half naked, she probably doesn’t have a brain, and she probably has no social awareness that she can provide to the world or why would she be posing half naked?’ And I love when people look at me like a person.

How many copies of Sports Illustrated do you have?

I have about three, but family members got a bunch, collectively maybe like 50 [laughing.]

It was a great. He was a really nice guy. He was one of the newer photographers first time shooting to go into the magazine I felt super comfortable, you don’t want to feel creeped out because it can show through in the photos the team that you’re shooing with.

You were chosen as one of 24 models out of hundreds of models. Did they tell you why they picked you?

That’s a great question. They didn’t tell me why. I’m actually going to ask now because I’m curious to know too.

My ultimate dream as long as I’ve been modeling is to do a Victoria’s Secret fashion show. I went to the casting, and I got a great response, but hopefully this year I can get a spot in the show.

How do you think modeling affects your body image?

I’m not going to lie. There are times when I do feel…not broken, but ‘is this too much? Am I naked too much? Should I not show my body?’ And I second guess myself, but ultimately I sit down and say, ‘what are my motives for doing this?” This is what I enjoy doing. It’s not like I’m doing it for the approval, but even if I was, nobody can sit at a computer and know that. I think the body is beautiful.