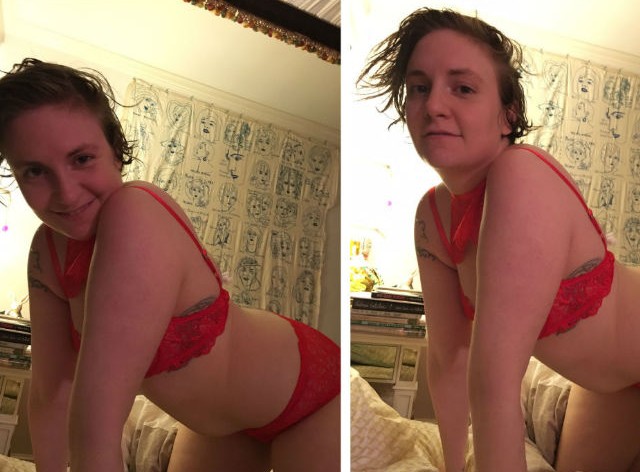 Lena Dunham’s Refusal To Be Retouched Is Truly Empowering
by Lindsay Peoples | March 8, 2016 at 5:52 PM

Last week, we reported on Lena Dunham calling out Tentaciones Magazine for slimming her thighs and retouching her image for the cover.

Naturally, the cover got a lot of praise for making Dunham look completely different than she does in real life and Twitter went crazy. This all further begged the question of why female celebrities even allow themselves to be retouched in such a harsh manner.

In her first Instagram post, she said, “It’s a weird feeling to see a photo and not know if it’s your own body anymore (and I’m pretty sure that will never be my thigh width but I honestly can’t tell what’s been slimmed and what hasn’t.)  I have a long and complicated history with retouching. I wanna live in this wild world and play the game and get my work seen, and I also want to be honest about who I am and what I stand for.” And in today’s issue of Lenny Letter, Dunham continued the conversation by stating, “Not done with getting my picture taken (once an insufferable ham, always an insufferable ham) but done with allowing images that retouch and reconfigure my face and body to be released into the world. The gap between what I believe and what I allow to be done to my image has to close now. If that means no more fashion-magazine covers, so be it … I bid farewell to an era when my body was fair game.”

She knows that she has long been a body activist and figure that women admire because she is unapologetically herself—doing nude scenes on Girls, wearing big, poofy gowns even though people told her to wear something ‘more slimming’, and has continued to go against the tide of society’s pressures and beliefs.

She also talks about how earlier in her career she didn’t question when magazines changed her body because she thought that was standard. She says, “[At 24,] whatever they did to make women appear important, desirable, and worthy of praise was what I wanted … Considering my commitment to showing my realistic body onscreen, this was a kind of cognitive dissonance I didn’t want to, and couldn’t yet, consider.” I can only imagine how many celebrities are taking part in blatant photoshopping and just standing by without saying anything, even if they know that it’s selling totally false ideals for women to look a certain way.

She ends the note by saying, “This body is the only one I have.  I love it for what it’s given me. I hate it for what it’s denied me. And now, without further ado, I want to be able to pick my own thigh out of a lineup.”

Feels like it would be a cold day in the desert when society would be ready to accept that way of thinking, but we’re here for it.