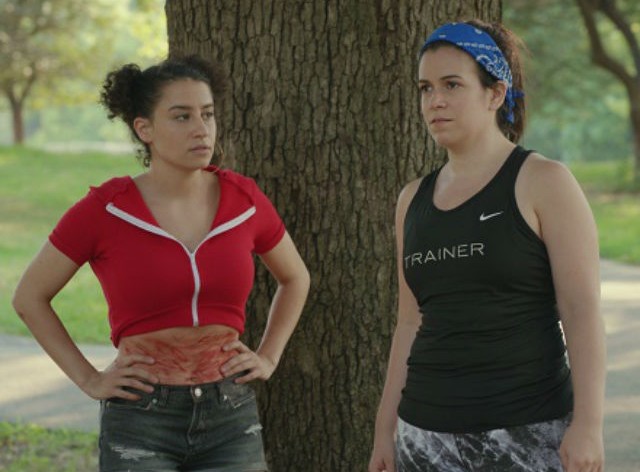 In this week’s Broad City, we learn more about Ilana’s friend with bangs.

Abbi’s a trainer now and the locker room for trainers at the gym is somehow co-ed. So while everyone else is as cool as a cucumber hanging out arms spread, in the buff, Abbi tries to learn how to put on a sports bra under your towel (awkward and slowly until you realize you can’t.)

Even Modern Family recently explored young Manny’s body shame in a gym situation, and who could forget the infamous locker room storyline in the Basic’s Bible, Sex and the City?

At Broad City’s Soulcycle sendup Soulstice, (which is filmed at an actual Williamsburg gym called Chalk,) the inflatable sea animal humping trainer offers Abbi the private space so that she doesn’t have to show her bod. Unfortunately, this episode misses the opportunity to call back Abbi’s fear of group nudity, comedy-wise, it’s just treated as a quick gag. But it is realistic. Abbi takes him up on the private space, letting us inside the mind of a woman who is far from as sex positive, body positive, and dog couture positive as her partner in crime Ilana.

When we encounter locker room nudity fear in Sex and the City, Charlotte is terrified that other women will think her thighs are too big to enjoy airtime. Plus, as she puts it, she didn’t grow up in a “naked house.” All the pressure of girl judgment makes her not want to eat Magnolia cupcakes, but in the end, she triumphs because she only half covers her body with a towel and a woman says she’d kill for her breasts. Charlotte smiles haughtily. The end. Not so realistic even though it’s a show about real things that happened IRL.

In real locker rooms, other women get that you have to take your clothes off. Showering off the elliptical sweat in your overalls isn’t a solid option, but they’re a great place to revisit high school awkwardness. And Broad City definitely nailed how women, especially in their 20s, aren’t feeling totally free. Abbi’s body, her choice. (That’s also true it comes to a gym’s variety of soaps and whether or not to get nekked.) But it’s such a spot on depiction – to see her surrounded by Trey, Gemma, and everyone else, who happens to look more like the stereotypical trainer than Abbi making her feel uncomfortable for being uncomfortable. Even for a nude model who goes braless, dropping all the clothes in the naked locker room can be a dicey proposition. Worth noting: Awesome to see a trainer with Abbi’s body type on the tube, and at any size locker room nudity can be weird. It’s why she’s friends with unapologetically body pride til the end Ilana.

Ilana has joked about Abbi about being a mainline prude in the past, and this was just so on for how plenty of women feel in these scenarios. Good god does Abbi bring this one home, and by bring this one one we mean, excuse herself from the situation for the private space. Just because you’re not airing it all out, doesn’t mean you’re not team body positivity though. Another week, another real-life scenario depicted with warmth and flair by these two.

They just get it. Broad City, from Comedy Central.