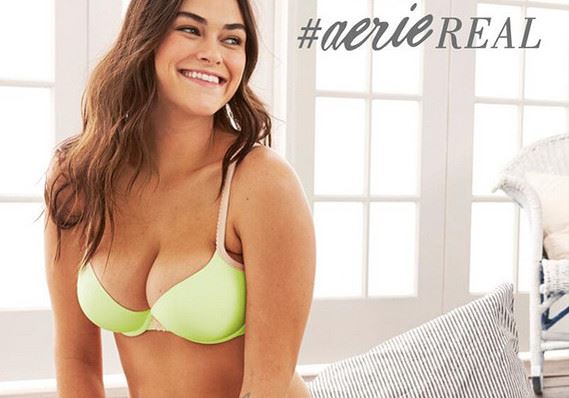 It’s about time people realized the significance of inclusion, but it also shouldn’t be a big celebration every time a brand decides to think about women that live in the real world and are spending real money further supporting these companies and contributing to their growth.  In case it wasn’t already obvious, being inclusive is also (who would have thought?) a financial investment that companies consistently see a return on.

Our very own Iskra Lawrence is proudly an official Aerie girl, and has said of her own ads with the company, “When I stripped it back [airbrushing] I felt most beautiful when I was just being me.”

The idea to put more authenticity out there and less photoshopping does wonders for body positivity, making women want to come back and feel good about wearing the brand instead of feeling like they don’t live up the women advertising it. The difference between walking past a highly-retouched photo of a Victoria Secret ad with models that are almost prepubescent in size with massive push-up bras on and walking past a photo of a model who actually looks like my friends and the women in my life in wearable underwear is a completely different feeling. So different that when you compare the two it feels like they exist on two different planets.

And because it’s long overdue that brands got on the train of understanding body diversity, it’s important to note that Aerie’s sales have grown almost 15%, crushing other retailers like Abercrombie & Fitch that has been under fire for its use of models that had a waist-to-hip ratio of less than .4. This fact alone proves that all the times retailers push against extending sizing because they think it’s not profitable or steer towards a specific body type and aesthetic of models are simply not valid arguments.

Not to keep tooting Aerie’s horn for finally getting smart about how they’ve realized the difference inclusivity makes, but this is what should be happening with all retailers. Companies should be working with models of all sizes, races and genders because that’s just normal life.