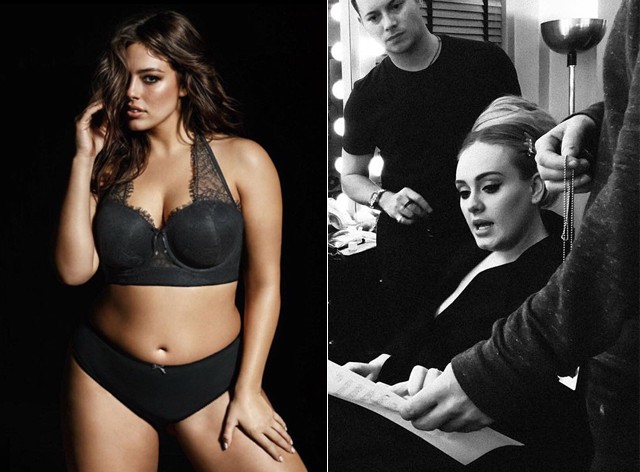 I’m So Sick of Fashion People Telling Curvier Women They Have Beautiful Faces
by Ashley Hoffman | March 1, 2016 at 10:24 AM

Now that Ashley Graham is dominating the world with her talking points and her unapologetically rockin’ bod, inevitably, there are people standing up against the right to have her waist.

That’s par for the body shaming course, but it’s really the cherry on the sundae when the critics who take issue with a woman’s size throw their faces some love.

We get it. Comments like these from IMG model Tallulah Harlech on Beth Ditto’s bad endorsement are all in the name of health and happiness. Being sick with concern over how a woman who for all anyone knows could very well be in tip top shape because she’s curvier is one non-thought, but then comes that “SUCH a pretty face,” comment.

When Cheryl Tiegs recently expressed concern over how Ashley Graham was making poor health glamorous, she also noted the beautiful face. Here’s what she told E!

Interestingly, making poor health glamorous is probably what Fergie was always singing about with Glamorous, and “healthy in the long run,” is how we’ll continue to toast the sun with Moonshine in the morning. But when you’re gearing up for the classic beautiful face/unhealthy bod insult, maybe just don’t.

Fashion people do more interviews about OPH (other people’s health,) than they have mirrors, and there’s more “beautiful face” compliments to soothe the blow of the weight loss advice where that came from. Here was Karl Lagerfeld on that fateful day Karl Lagerfeld took over Metro Paris to disseminate important thinky thoughts in 2012. He also gave the nod to the beauty of Adele’s face when he told her that her body sucked.

“I prefer Adele and Florence Welch. But as a modern singer she is not bad. The thing at the moment is Adele. She is a little too fat, but she has a beautiful face and a divine voice. Lana del Rey is not bad at all. She looks very much like a modern-time singer. In her photos she is beautiful. Is she a construct with all her implants? She’s not alone with implants.”

When he clarified his comments on Adele’s weight and how he saved her from a terrible situation, he told an interviewer on CNN’s Fashion: Backstage Pass this:

In the movie Bachelorette, because Rebel Wilson’s character’s curvier body is just so reprehensible and undeserving of affection, her friend says “you have a pretty face,” like it’s an offering in spite of everything else that’s aesthetically displeasing. Because looking beautiful in the face is the only thing these women apparently have going for them, and if they don’t lose weight, because a pretty face is just so wasted on a body that’s not slim, the world might implode.

Always appreciate your welcome thoughts on our face, but when it’s couched in a statement about how we’re too heavy, maybe skip it?
Photos sourced from Instagram