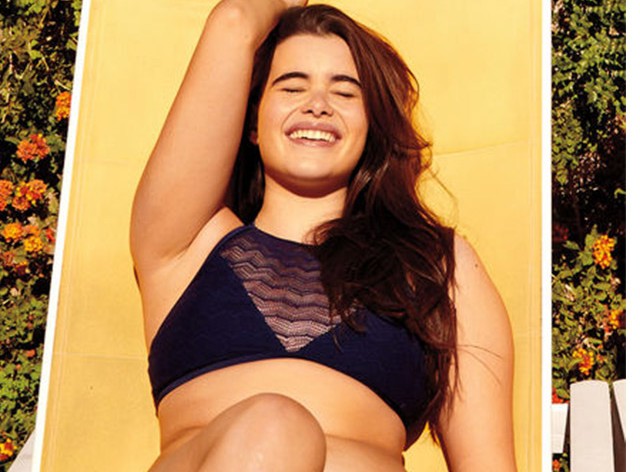 Please Stop Saying Asking Curvy Women How They Dare to Be Confident in Bikinis
by Ashley Hoffman | February 23, 2016 at 10:32 AM

When we launched, we made it very clear that it’s a tad silly to ask women who are obviously curvier than the average famous woman why they haven’t offed themselves yet. You know the type of observations we’re talking about. Like, where you get all that shocking confidence at your size? And wow, I just really admire how you put yourself out there and you don’t care what people think!

It’s still a real hoot how celebrities and models who happen to wear larger sizes are so often interviewed about how they’ve managed to love themselves at their various sizes. Meanwhile, interviewers continue to ask our slimmer celebrities about how they keep their girlish figures SO WE CAN TOO.

When we asked Ashley Graham this:

“How do you feel about being a spokesperson for beauty ideals and self-acceptance, while people might not look to someone like Gigi Hadid to add to that conversation?”

She responded with this:

I think it’s a necessary thing right now because you don’t see women like me in the pages. If I have to be the person that’s talking about it, that’s fine. I’m more than happy to. If that means I got to write a book about it, that’s fine I will.
And these answers do need to be heard.

And when we asked Denise Bidot this:

Ever wish someone would ask you about something other than size?

She responded with this:

[Laughing] I’m up for any question. I’m pretty much an open book, but I think the conversation about size diversity should be encouraged so I’m not offended.

Fair responses because these issues need spotlighting. We’ve said it before. Every woman should be able to talk about what she wants people to know, and we do believe it’s important for famouses like Gabourey Sidibe and Kate Winslet to discuss self-acceptance because their highly quotable quotes illuminate body image stuff. But it’s HOW you ask women about their shocking confidence. Let’s stop assuming that it’s a radical idea that someone is confident despite the fact that they missed the CONFORM TO NORMATIVE BEAUTY STANDARDS OR ELSE memo. Let’s also stop assuming that all the non-famous women lack confidence and need a lesson from Precious Lee too.

For instance, the media should stop asking smokeshow Barbie Ferreira how in God’s green earth she manages to wear a bikini in broad daylight without shame. She’s not here for it.

And Barbie has said as much to Glamour: “Asking ‘How do I feel confident in a bikini?’ because I feel like no one would ask that to a Victoria’s Secret model. No one would ask that to Kate Upton. I understand ‘How to feel confident’ [in general], but in a bikini, if you’re adding that on…I wear a bikini like every other person in the world wears a bikini or a bathing suit.”

Given that she is a professional bikini model for Aerie and the like, perhaps it’s a very well-intentioned question when she gets asked it ten times a day. Maybe the people asking it only want to learn how to be as hotly, reasonably comfortable as a pro model when they kick it at the pool. When we interviewed the woman who coined the term “fatkini,” she talked about all the people at the beach had ugly things to say about her, so perhaps that’s where this question comes from.

But to our ear, it’s loaded with prejudice. It’s got that hint of — what makes you so bold to wear a bikini without a six-pack — subtext to it. (Worth noting: there are women of all sizes who DO feel uncomfortable in a bikini.) We imagine this inner monologue takes place often.

Insecurity: are you really going to go out in a Chromat suit without a CR Fashion Book-approved facekini to conceal your identity?

Anxiety: Pretty sure pictures of you in this bikini are trending on Twitter.

WE GET IT, not everyone is “that kind of girl” in the way that Lena Dunham intended.

Let’s definitely keep asking curvier women about all the countless issues related to size. But asking them anything that sounds like, what gives them the audacity to feel something called “confidence” between their lack of a thigh gap when you show skin…enough with that already.

Tags: Curvy
About the Author