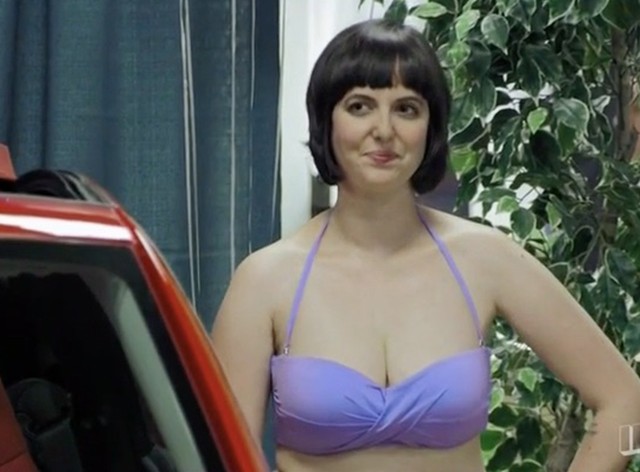 Portlandia, that dreamy show about deluded hipsters just did something that’s seriously worth celebrating.

In this recent sketch, Carrie and Fred blew through town to sell people on some newfangled thing called a CD-ROM, and they used a tried and true sales technique: the sexy bikini model.

Obviously, it totally makes sense to wear waterproof swimwear indoors when you want to be convincing about the benefits of a product. But among all the women who are indoors in swimwear selling stuff in the media and in real life, this one, featured on Portlandia, was on the curvier side. (This happens with women who come in different makes and models, but they’re not often visible.) Seeing her as one of those objectified salespeople was actually totally refreshing and gamechanging.

We can count the number of times we’ve seen a curvier woman in a triangle bikini on the TV on one hand. The last time was on Girls when Hannah Horvath (Lena Dunham,) sucked all of the class out of Marnie’s dream beach weekend in one. And even though she started the day all ‘this is my bod, and I’m all good with it,’ she ended up getting kicked out of a store, and hiding her stomach in shame when someone inevitably compared her to a ‘crazy’ ‘fat’ girl who was so much fun.

It may be an hourglass figure of sorts. But rare is the day, even in a fake town with beach goths, when we see a curvier model in this context celebrated for being lustworthy, confident, and proud like it’s her job (because it is her job.)

See how a woman appears in a bikini who isn’t conventionally slim below and nod your head in approval. What do you think? 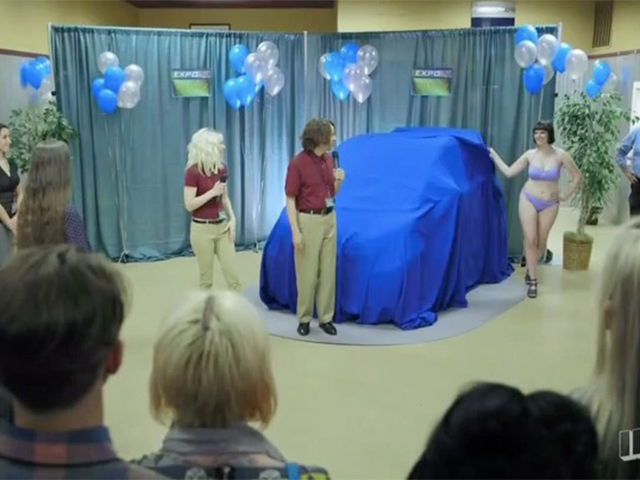 A bikini model stands by a mystery car in Portlandia. Yes this is unconventional because of her shape.

Tags: size
About the Author