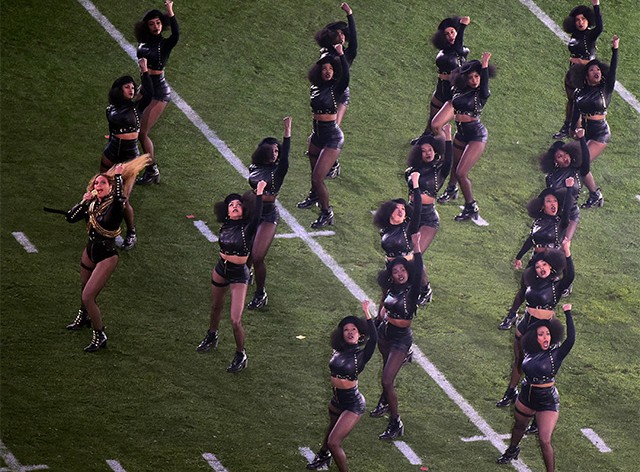 Beyoncé’s Super Bowl Show Was Finally a Reckoning for Natural Hair
by Ashley Hoffman | February 8, 2016 at 11:58 AM

“I like my baby hair with baby hair and Afros,” rang Beyonce’s words in “Formation.” Hate to say we told you so, but we ALREADY broke the news that Beyonce AKA queen of the natural world was to sing a song, and that it was to be called Formation and that it was likely to be about rebellion. Back to the point.

Those words are from one of the most influential women of color with very her own brand of feminism, and the unrepentant black beauty throughout this power anthem declared a celebratory war against forcing women to get down with Western beauty standards. (The whole stunting thing was Black Lives Matter, Zana Bayne-ified Black Panthers AT THE SUPER BOWL.) You guys know how much we love when Beyonce calls in the big guns. She makes predictably fire stylistic choices. But THE HAIR, from the dancers’ fros to the stunning hair shown off in all different textures in the video was perhaps the most surprisingly politically-minded part of it all.

Oddly, people of color, particularly in the art world, have criticized the “Beyoncificaion of black hair.” Beyonce’s hair has gotten its share of flack for being fake or chemically altered to look straight and relaxed, like the hair of white women. You know, the hair you see with the same frequency that you blink. (Bey’s in braids in her own documentary and it was refreshing to see her stripped down.)

Given that women of color are constantly reminded that they might benefit from boat loads of “relaxer” so that they can get in line with the Western or Eurocentric standards, couldn’t one of the most important people to put her foot on a chaise lounge do her natural do? Her hair may be her own business, but now she’s using it for a good cause. Remember when runway “rich girl hair,” was JUST RECENTLY the cool new groove thing and you were like ‘nope.’? Remember when Blue Ivy had natural hair and people thought it was WRONG? We could only hope all this ignorance would culminate this way in a dramatically effective mic drop moment in front of every living being.

If you’re going to show that having edges is absolutely stunning, then shouldn’t it be in front of millions of Americans who love footy ball, America and cream cheese dip with fried onions? YES IT SHOULD BE. Bonus: Rumors about Beyonce’s rhinoplasty abound, and yet here she was singing about the issue of black erasure. Bey even compares her nose to Jackson 5 nostrils. And yes, once Beyonce likes something, other people feel it’s O.K. even though women should without her approval. That’s how impressionable these images are, particularly when they’re uttered by songwitch Beyonce.

Everyone’s acting like fashion is finally embracing natural hair now that a few magazines have just gotten around to showcasing a few, probably thanks to cashing in on the coolness that is Amandla Stenberg and Solange banging it into people’s heads that natural hair is beauitful. As fashion learns that natural born hair is really flattering on everyone without being silenced into submission with hot tools, the fact that this is on display in such a totally deliberative manner was long overdue. Because we’ve all learned that a woman of color’s natural beauty = not so much fun inspo on a major stage for the people who traffic in What We’re Supposed to Look Like. That’s what makes this a reckoning on a lot of different levels. Suffice to say this ode to black beauty was a reason to pretend you knew the names of teams.

I already told you this song was going to be about setting rights to injustices by flipping her hair. And what a hair flip it was.