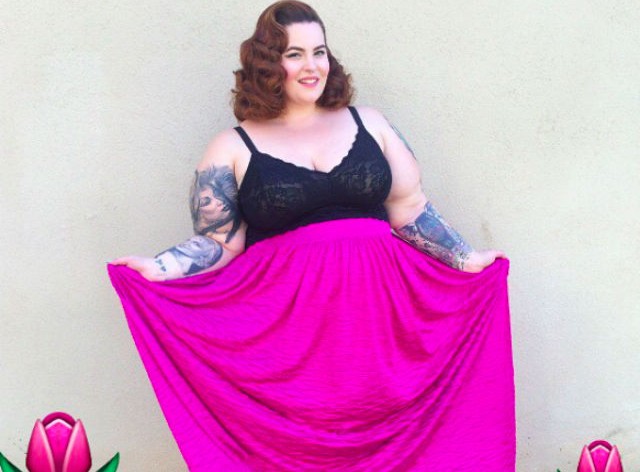 Tess Holliday Clapped Back at a Hater Who Said She Shouldn’t Be a Role Model
by Eliza Dillard | February 5, 2016 at 9:56 AM

Another day, another slay for babe and fountain of wisdom Tess Holliday. We imagine it must get exhausting fighting off the internet trolls and WebMD scholars, but Tess manages to get it done and still look hot in the process.

Like a lot of people who pop up on the internet, this one tweeter was *extra* concerned about the state of Tess’ body. She’s not into the idea of Tess being a role model because she has hips, and she clearly thinks Tess owes it to the public to hand over her health records. Catch part of the exchange below.

Are you a ding dong? https://t.co/JjLUIzU4ST

@Tess_Holliday It’s a simple question. Not trying to be mean. I just think you should be honest about the reality since you’re a role model.

@Delaware_Dolfan @nickie_flare @Tess_Holliday You can be fat & happy. You can be too thin & happy. Just don’t be a role model.

So Tess hit her with a friendly dose of #selflove.

They are plenty of ppl that preach fitness & not enough talking about #selflove. Why don’t you worry about yourself? https://t.co/HIztBh8oj6

@Tess_Holliday The fact that countries have made laws banning models who are too thin, he glorify the opposite extreme, I find troubling.

THEN YOU DO SOMETHING ABOUT IT INSTEAD OF BOTHERING ME. I have cake to eat & you are wasting my time. https://t.co/0KkZWpdPuF

@Tess_Holliday I will let it go if you say that you have zero health issues bc of your weight. Pls accept the responsibility of “role model”

After putting up with way too much flack from this chick, Tess finally kicked her to the curb with a manicure emoji.

Only because I want you to look like to foolish troll you are, I do have ZERO health problems AND I’m fat. Booyah ???????? https://t.co/KmeuzDI2RS

Unfortunately, nothing would shut her up and ease her mind. She’s clearly the one who will be in the delivery room when Tess gives birth.

@DrBraLove@Tess_Holliday IT IS IMPOSSIBLE TO HAVE A BMI ABOVE 40% AND NOT HAVE HEALTH ISSUES! She’s lying or she doesn’t know. Yet.

But Tess clearly didn’t have enough characters to care.

My rage for how stupid people are on the internet constantly exceeds 140 characters.