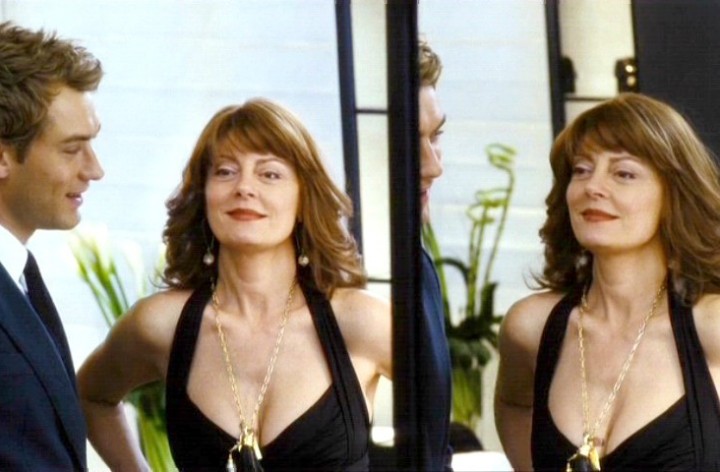 Piers Morgan Told Susan Sarandon When to Hide Her Cleavage Again
by Ashley Hoffman | February 5, 2016 at 8:57 AM

The existence of cool cat Susan Sarandon’s cleavage is STILL causing quite the stir. Read the brilliant Eliza Dillard, who specializes in the image of “mature” women, who went deep on that noise here.

For throwback purposes, Susan Sarandon posted a picture of her in a bra from Rocky Horror Picture Show and dedicated it to the one, the only Piers Morgan. (In case you missed this important issue, he’s a decency aid who advised her not to show the girls at a funeral.) As a boob-carrying customer whose breasts occasionally show themselves whether I’m really actively trying to or not, I can almost wrap my head around this sitch, except the dialogue about her chest is splashing all over the internets now.

Anyway, and now, welcome to Piers’s funeral. Susan responded DAYS AFTER THE NEWS OF HER VISIBLE CHEST SURFACED with this.

AND HE KEPT GOING with his not two, but three but five cents of STOP IT.

His twitter’s become quite the messy little trip into his great political mind. He’s all the “hypocritical feminazis care more about cleavage than real issues” this and “cleavage selfies I’m getting prove my point” that. (By the by, doesn’t look like he’s gotten too many.) Stop talking about funeral attire Piers. It is not a good look. (This may be the ideal time to point out, yes the image of women is a BFD.)

Just for the record, @SusanSarandon, I think your cleavage is magnificent.
I’d just keep it hidden for “In Memoriam” tributes.
Love Piers x

Won’t be long before feminazis start attacking me as ‘sexist’ for retweeting the cleavage tweets their fellow feminists are sending me….

As it happens, we think boobs go with memoriam tributes quite well. Because in life, we’re in death and women who give birth to people sometimes have inconvenient and inappropriate mammary glands.

Thank you Piers, you’re the reason why CAN YOU NOT became a thing. What’s worse? Being Piers or punching eight kids?

Anyway, get a load of these two. We sense these gals have fun wherever they go. Shout out to Susan for having such an incredible career, entertaining us, standing up for human rights, and also looking smoking hot.

Tags: susan sarandon
About the Author