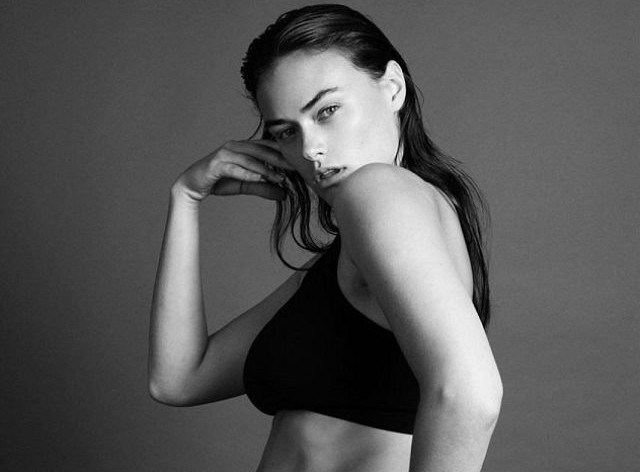 Why I Love That Playboy Featured Unretouched Model Myla Dalbesio
by Eliza Dillard | February 4, 2016 at 3:54 PM

In other earth shattering news, today Playboy celebrated new beginnings with its first non-nude issue. To embrace the wild new times and confuse older generations, the issue is an ode to your favorite app–Snapchat, of course. That’s cool, yeah, whatever. I’m more interested in the fact that curvy model Myla Dalbesio landed her own feature in this issue.

You might know Myla as the girl who caused a stir in Calvin Klein’s 2014 campaign because people got wind of the fact that she’s considered a “plus size” model to the industry. That’s still a big talking point, apparently, but back to the spread at hand.

Myla, who also kills it as a photographer, was tasked with visually demonstrating how to capture the female form by snapping pics of herself for Playboy. The results are natural, beautiful, artistic, and refreshingly tasteful for the new spin on Playboy. They’re also hella body positive, as she’s lounging sans clothes (but with all her “naughty bits” covered, naturally) on chairs, a couch, and a bed somewhere that looks warm. There’s also a picture of the shadow of her curvy silhouette, which I’d like to set as my computer screensaver. Best of all: according to Myla’s Instagram, all photos are UNRETOUCHED, so hallelujah to that.

I know that the new Playboy is still Playboy, and dudes obviously like girls who have some curvage. The magazine’s website has been known to throw bones to curvy models like Ashley Graham and our own Iskra Lawrence. It’s not a huge shocker that they’d feature a curvy babe like Dalbesio looking hot lounging on stuff. Still, this spread is different. It feels like a win that a model who is, by industry standards, “plus size” is featured without the magic of Photoshop in such a landmark issue for the magazine.

Nice to see Playboy honoring a curvier woman with a tasteful spread in an issue that people will look back on and refer to as a game changer.