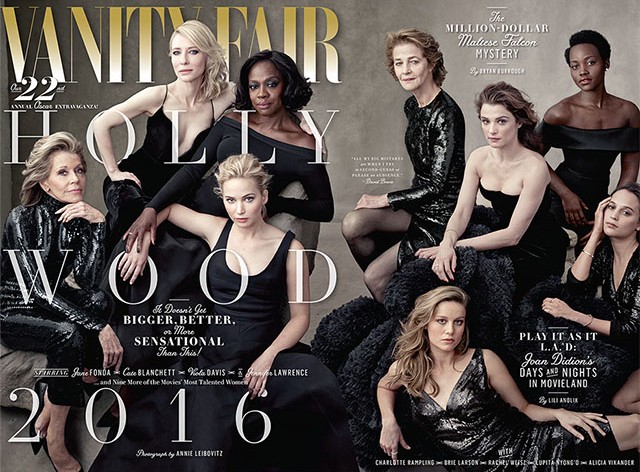 Coming to a newsstand near you on February 8th is the always controversial Vanity Fair Hollywood Issue.  The cover, more diverse than the Oscar nominations, still lacks size diversity.

The 2016 cover, shot by Annie Leibovitz, comes at a rough time for Hollywood. Controversies about racial diversity, the dearth of roles for older women, the lack of job opportunities for women in the film industry and even the gender pay gap have been fueling debates amongst the starry stars. Vanity Fair, the taste-maker of who’s cool in Hollywood, strategically decided to make this cover an all-women one, featuring three women of color, women ages 21- 78, and women that have been outspoken on these issue.

It would have been awesome to see the always relatable Mindy Kaling, OITNB beauties Dascha Polanco and Danielle Brooks, or the super funny Melissa McCarthy. All of whom crush the entertainment industry with their beauty and talent, and that’s what being on the cover of the Hollywood Issue is all about, right? Maybe next year the Hollywood Issue will reflect a size-diverse Hollywood.

Related Links:
Why Vanity Fair Featuring Lola Kirke’s Armpit Hair Is a Victory for Us All
Ashley Benson Is Here to Remind Us That Size Discrimination in Hollywood Sill Sucks.