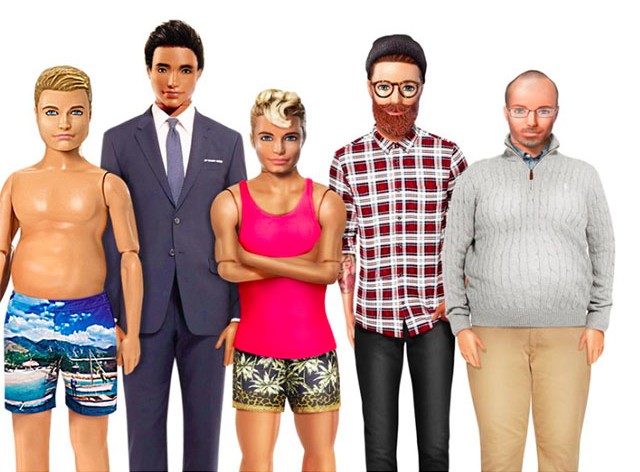 Unless you’ve been living under a rock, you’ve heard about Mattel’s major realization that no women ever has actually looked like Barbie, and after over fifty years decided that maybe Barbie should look a tiny bit more realistic, but, of course, not too much.  Barbie’s extreme makeover, has been mostly praised by the internet, but has been met by some genuine and not-so genuine concern.

Feeling a little left out of Barbie dream house playtime, men took to twitter to complain about Ken not getting a makeover, even GQ offered Mattel some advice on what type of body Ken should have next.

This morning, online retailer Lyst.com, provided a digital representation of what body-positive Ken might look like, you know to level the playing field. Lyst’s collection is complete with Beach Dad-Bod, because we all need to be reminded of that horrific adjective, and balding Ken, because nothing is more realistic than aging.

I know we are talking about dolls here, but can we be a little bit more mature in how we bring up the dialogue about inclusive body positivity? Lets genuinely talk about how we can urge Mattel to give Ken a makeover, by offering a body-positive companion instead of a satirical retaliation.

In the meantime, give Mattel some time. It only took them 57 years to recognize that Barbie is unrealistic. Oh, and while we are filing complaints, Mattel, let’s figure out a way to keep the plastic heel actually on the Barbie.