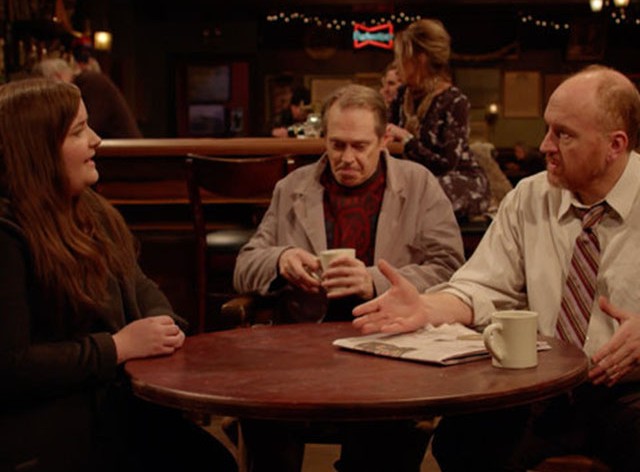 So this weekend, Louis C.K. revisited the lovely way people view women who wear larger sizes in the excruciatingly realistic Horace and Pete.

It’s that age-old question: can a woman find happiness without being slim? READ ON.

First off, we’re grateful that one of the greatest comedians ever right now surprised us with this episode like Beyonce. Despite pretending to be a sad sack, it’s pretty clear the guy actually does secretly harbor Beyonce confidence levels so it makes sense. Louie, a desirable star who HILARIOUSLY enough, does not have a rock hard six-pack, has expertly revealed the daily plight of a woman who wears larger sizes before. (Previously on Louie, the dude accidentally went on a date with a curvier woman right after a model scooped him in up in a convertible in the prior episode.)

It wasn’t universally adored, but countless women on the internets loved it because of the way he expertly revealed that the word “fat” doesn’t actually make everyone want to die, and that obviously women of all sizes deserve romantical attention.

Back to Horace and Pete. In this teleplay of sorts, Alice (Aidy Bryant,) is extremely disappointed in her disasterpiece dive bar owner father Horace (Louis). She finally meets him in person to chat through gritted teeth about what a disappointment he is, conveniently near a bunch of insensitive people who are loaded. (The reason things are strained is because Horace seemingly split from the mom to shack up with a new woman.)

Here’s what they basically say:

Alice: YOU SCREWED EVERYTHING UP AND I’M NOT GOING TO MAKE YOU FEEL BETTER ABOUT DATING THAT RIDICULOUSLY CHEERY GIRL WHO FINDS FARMERS WITH PURPLE BEANS EXOTIC AND FASCINATING. I’D SOONER LIVE IN A DUMPSTER THAN SHACK UP WITH YOU, DAD, EVEN THOUGH I MIGHT NOT HAVE A PLACE TO LIVE. I’M DOING YOU A GINORMOUS FAVOR BY TALKING TO YOU.

Horace: I’M SO FREAKED OUT RIGHT NOW BUT I WANT TO HAVE A RELATIONSHIP WITH YOU, AND I WISH EVERYONE AT THIS BAR WOULD SUDDENLY LOSE THEIR ABILITY TO SPEAK LIKE ARIEL IN THE POPULAR ANIMATED FILM THE LITTLE MERMAID.

They talk it out as best as anything can be talked out with someone as bumbling as Louie, but why is she REALLY bitter? Don’t worry! Marcia (Jessica Lange) knows. Of course, she decides, it’s because Alice is OVERWEIGHT. THAT’S why she’s mad. Case closed. So drunks at the bar are all like HAVE YOU SEEN YOURSELF? WE KNOW YOUR WAIST MEASUREMENTS ARE THE SOURCE OF ALL YOUR FEELINGS. If only Alice could just get over the fact that her size is so depressing, then everything would be all good in the broken family, according to Marcia who is just eavesdropping.

We hate to see such a fire coat worn by Jessica Lange wrapped up in such SMALL-MINDED THINKING ABOUT SIZE but it’s a very realistic representation of all those lubricated and non-lubricated female relatives who won’t let you live. You know the ones. The women who think they’re being helpful when they remind you slimmer= happier. Alice barely addresses it because she is like, all of this is unbearable yet predictable, in the most delectably appropriate way. She doesn’t tragically cry in a victim-y fit of self-pity, like someone who is a embarrassed. She’s used to it.

Then we get more totally not intrusive commentary from Uncle Pete (Alan Alda), who chimes in about this fat woman he knew who was REALLY content even though everyone expected her to be a sad piece of garbage. (It’s actually O.K. to be “fat,” because he knew this other joyful woman who was, therefore it’s still socially acceptable for Alice to be Alice.) He was trying to be nice, and she didn’t get it. There’s no way your emotions have anything to do with anything that isn’t related to your size Alice, that would be absurd!

Here’s where Louis gets it so right. It’s important to see how when Alice and Horace’s relationship, like everything else around them, is on the way down, but the peanut gallery just screams at her about her weight. We love that Alice is decidedly NOT sweet because Aidy Bryant COULD have played this as just a little bit adorable. (See how she wears a pink sweater and plays a preteen on SNL.) But this was rife with absolutely piercing dirty looks. It’s with growing fury, but also just the complacence that comes from the certainty that everyone around you will disappoint you that Alice reacts to this. This weight commentary doesn’t shake her to her core, or make the tears flow as everyone looks at her and tells her how she should feel about her body. She rolls her eyes, and keeps on keeping on. Aidy, you can do so much with just your eyeballs, and we love you.

Louis’s character wants to die as the comments about his daughter’s weight keep on flowing. Even though Horace is so painfully awkward, if everyone wasn’t screeching about what a “fat girl” Alice was, then they may have been able to continue working out their issues for a few minutes. After all, Alice was being sincere about why she wouldn’t put on a happy face for him. During that time, Louis could have apologized and offered her a watered down Shirley Temple. Another day, another time fretting about size got in the way of life. Perhaps it’s all just a plot device that keeps these two from actually getting somewhere.

He could have said, ‘hey daughter, I know I broke up the family to hang with an EXTREMELY jaunty woman who kisses me repeatedly and wears an environmentally conscious bag, yet doesn’t make life any less depressing. I’m sorry for what that’s done to you and your brother, and I want to be here for you in whatever way you’ll let me.’ But people just body shamed them out of a chance for a catharsis, and it’s realistic.

Thanks for nailing another one Louis.