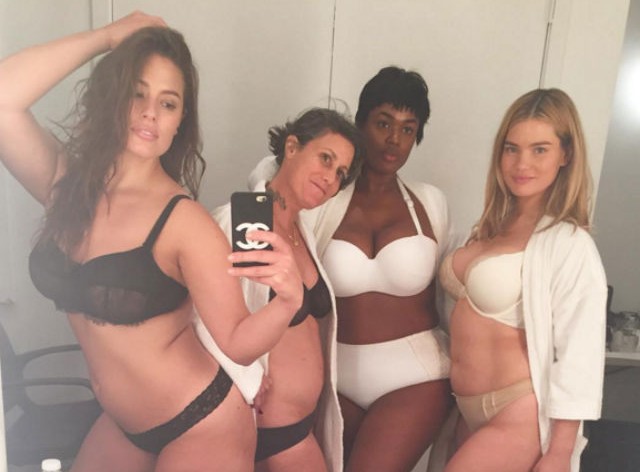 I get it. Seeing a model with hips like Barbie Ferreira in a hot pink bikini for Aerie is still a Six Flags-level thrill for most people. Curvy models are finally enjoying some (well-deserved) time in the spotlight right now, and that’s awesome.

With all the hype surrounding these models that are blessing their way into the mainstream, I’ve also noticed a trend that plucks my nerves. With a handful of body positive articles on curvy models who represent the majority also comes the word “normal” to describe their bodies.

So what? You might ask. When has being “normal” ever been a bad thing?  And it’s not that the word is bad or even wrong.  But it’s another exclusive and unnecessary label to throw on a torso.“Normal” is a word that is meant to be inclusive. I get it. But in reality, it’s totally the opposite. It creates a divide. It says that anyone with a body type bigger or smaller than Barbie, Iskra, Ashley, or whatever given curvy model you’re drooling over is, in somebody’s opinion, NOT normal.

It’s mostly a problem because “normal” is a subjective term. I think it’s normal that my cats use my forehead as a springboard while I’m sleeping, but that’s probably not normal for anyone else.  Similarly, what body types are considered “normal” to someone might depend on where in the world he or she is scrolling the web.

I get what people mean when they say someone looks “normal” and realize it’s an easy word to fall back on.  People who use the word to describe curvy models mean to say that similar types of bodies exist in large quantities. These bodies are common in society. They’re saying, hey, Ashley Graham looks like a lot of us, and she’s happy and healthy, and it’s nice to see her getting her life in Sports Illustrated. It’s NORMAL to see someone who looks like her walking down the street. But “normal” is not a word we should be projecting onto her thighs, unless we make it a universal term and throw it on every size model ranging from Kendall Jenner to Tess Holliday.

Related Links:
How the Media Fanfare for David Bridal’s Curvy Model Proves How Far Behind We Are
It’s Insane That People Are Still Debating If This Calvin Klein Model Should Be Considered ‘Plus Size’