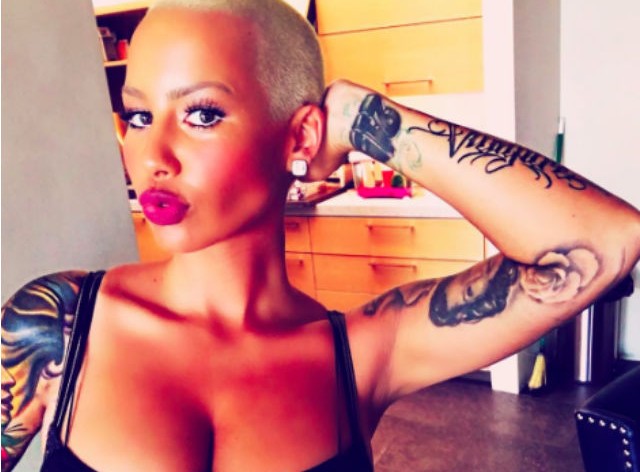 In case you missed yesterday’s whirlwind of events, there was a bunch of unnecessary Kanye and Wiz Khalifa drama that went down on Twitter. In a series of tweets that have since been deleted, Kanye brought up his ex-girlfriend and Wiz’s ex-wife Amber Rose and called her a “stripper” because that’s apparently always fair game. He said Wiz he must be mad that she “got” him for 18 years.  And then he tried to make up for it by complimenting her outfit choices, as Kanye does.

We thought Amber had the last laugh yesterday when she tweeted about how Kanye must miss her hands-on activity in bed. But this morning, she penned the most important essay you’ll read today about slut shaming and sexism for TIME.

Rose has never been quiet about the gross things people have had to say about her, but it’s great to get a personal essay on the matter from her. It’s unclear if Kanye’s comments were the last straws that prompted Rose to open up on this issue today, but regardless of that, she couldn’t have picked a better time. We needed this essay from her today because, no, it’s never okay for anyone, insane world famous rapper or otherwise, to slut-shame a woman and use labels like ‘stripper’ to define or insult her.

Rose’s raunchy tweets back at Kanye were fire, but they didn’t flat out address the real problem of sexism and slut shaming like her essay does. This is the really powerful stuff that we (and any other woman who’s had the fun time of dealing with slut shamers) needed to see. The fact that, no matter how much success she has had or will ever have, the conversation consistently circles back to the fact that Amber was once a stripper isn’t okay, and it’s so important that she’s addressing that.

Rose opens up about the lovely double standard she experienced being called a ‘ho’ for dating after her divorce from Wiz, and how people called him ‘the man’ when he went out with chicks. Cool. She also opened up about the need to justify who she was morally. She said this:

People would actually say things like, “Who would ever love you? You were a stripper. Why are you in relationships?” And I used to feel like I had to explain that maybe it was because I’m a good person.

But she’s come to realize that the best way to deal with it is to not give a flying frisbee about anyone’s unnecessary comments on her lifestyle. She said, “This is my life. This is about me. If you don’t like it, I don’t care. I’m going to do anything and everything I want with my own life.” As it should be.

And she urged people to think before passing judgment, which is something Kanye could have definitely heard yesterday afternoon.

So please: Before you judge someone—especially another woman—put yourself in her shoes and also look at your past. That’s what a lot of women fail to do. They’re so quick to call another girl names, but it’s like: You know what? There may have been a time where you looked back and said, “I probably shouldn’t have done that.” Does that make you a ho? No, it makes you a human.

Amen. Thank you, Amber Rose, for your Kanye clap backs and making the world a more livable place.