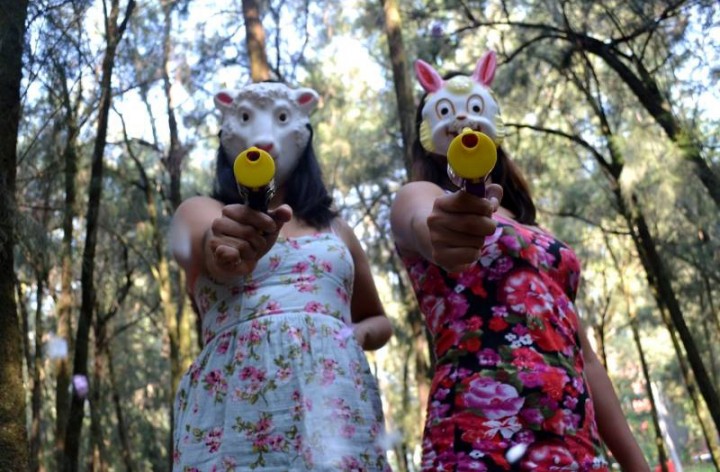 Genius Women Shoot Confetti Guns at Street Harassers and Scream a Punk Song
by Ashley Hoffman | January 28, 2016 at 11:23 AM

As usual, in Mexico City and everywhere, men are admiring all the prettiness the world has to offer.

The Stop Street Harassment documentary was also filmed in Mexico City where women other than ALL OF US get friendly reminders that they’re appetizing as they imagine their admirers falling into a sewer gap. Talking back can actually prove fatal in some cases, so the question remains: what to do other than walk by all powerlessly and try really hard not to scream bloody murder as your blood boils?

Via AJ+, these excellent women — who call themselves Hijas de Violencia (the Daughters of Violence) have elected to shoot these men point blank with a toy gun full of confetti TO THE DOME and sing the punk song, Sexista Punk. They seem to be doing this together, otherwise the whole SAY SOMETHING TO HIM instinct might not be as strong.

From one of the renegade street fighters in the video: “We recommend you have fun with so that you’re not left feeling violated after what happened and you’re able to move on and have a great day.”

Obviously it’s up to you whether engaging and educating human garbage is going to be your jam, but this is pretty dynamite. Here we have a woman saying: “you talk to me as if you are going to rape me,” so we will never stop talking about how awesome this idea is. Look how humored all the men are by the confetti guns! This is way cooler than making Charlie’s Angels gun hands in a group selfie.

We figured you’d need to see this, so watch below. The opener is baddass. We want to know. What do you think?

Related Links:
I Loathe Everything About the New York Post Telling Carrie Fisher to Be Thankful Disney Told Her to Lose Weight
New York Post Body Shames Honey Boo Boo to Save the World From Diet Myths