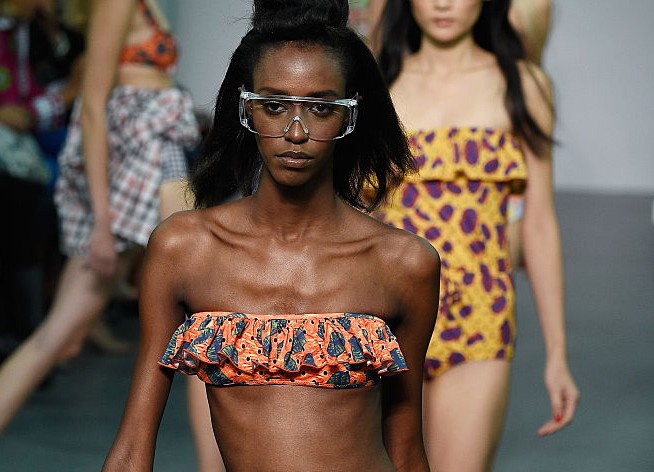 Jessica Simpson and Gwyneth Paltrow Prove That No One Has Had Enough of Bikini Bod News
by Ashley Hoffman | January 21, 2016 at 12:33 PM

Today the two top trending stories on Facebook were BOTH about nearly nekked famouses in swimsuits.

If a pattern has not dawned on you yet = the proof that “sex” or sexy women sells remains strong. Facebook — Tracker of the Stuff That Matters To Most– is here to confirm the obvious. We knew this already, right? But today the fact that these two nearly identical “news” stories were top of the charts tells you just how much nearly naked women matter more than everything else. It’s in the data.

We know you’re like OBVS, so explanation of how the world works thus imparted—let’s discuss.

Pictures of women looking hot can play a major role in keeping a “news” site afloat. Clicks down? Well, where were the nearly naked women on this? That’s a question a totally ethical member of the media may have to ask when no one shows up to read all the “good work.” The biggest hits are obviously the female form in all its glory. When things are slow, a site will see what a celebrity is up to in a tropical locale or in the lucky case – be on vacation and capture the scoop of a century – someone in a bikini, photo opp of a lifetime. It’s enough to make Lana Del Rey set a paparazzi helicopter ablaze, but it continues to work.

Today, people on Facebook are understandably critiquing the ludicrousness of the similarity of these two top “stories”–but the evidence remains, this is what many of the public want. Celebrity beach season is all over Instagram as well, because if we don’t see people glistening in bikini tops, we shall surely perish, and the fact that a woman appeared in public and showed her skin will routinely trump everything else. BIKINI BODIES WIN EVERYTHING ALWAYS. So we know it’s all about how a woman’s body is up for consumption, (unfortunate), blah blah blah. If you want people to pay attention to Mexico’s socioeconomic gap instead of a thigh gap – reporters might consider throwing in some important photo evidence of Jessica Simpson’s thighs on vacation in Mexico.

Arguably, people say they want real journalism, and there is room for “good work.” But Sports Illustrated’s Swimsuit Edition is its most popular issue. It’s not because they talk to athletes about overcoming ridiculous obstacles and have absolutely stunning photojournalism features on these warriors. It’s because of the shiny and bright boobs, bum and legs. The female editor even teased it with a photo of a Ronda’s backside. It’s no wonder people want to see the GOOP onesie curator and non-drunk lingerie maker in bikinis.

Speaking of Jessica, of course the brief story on her is filled with phobia about weight too. US Weekly makes up nice ways to say that Jessica Simpson, who has said she’s been all kinds of sizes and did Weight Watchers, is curvaceous but toned, and it’s a vast improvement.

Excited person on Facebook says of Jessica’s photo: “This lady has been through it. The rise and fall of weight. Everyone watching every pound. The best revenge is a life well lived or a bikini in Mexico.”

Quick note: Hear! Hear! for women owning their bikini bods at every size no matter what.

Recently, Women’s Health came down from the mountain to announce the ‘how to have a bikini body’ era is over for them mostly thanks to the backlash about that beach body ad that said THIS IS HOW TO BE SLIM OR ELSE. What qualifies as a bikini bod worth looking at? All of them obviously. Though there aren’t even enough “names” with curvier figures yet to report on. At least different kinds of bodies would be worth spreading images around because raising awareness that women of all sizes don’t hate themselves and occasionally enjoy fun in the sun is something people still refuse to believe. (No it’s not bold when they wear a bikini — just ask Olivia Campbell.)

We get this cold practical hard truth that the internet appreciates more women in little clothing like a kid on Christmas appreciates more gifts. So for the people complaining about this, maybe someone somewhere will stop clicking on them? Holding our breath for that precise moment.

Related Links:
Why Women’s Health‘s ‘Bikini Body’ Ban Doesn’t Solve the Problem
Protein World Is At It Again With Another Beach Body Ad That Excludes Curvy