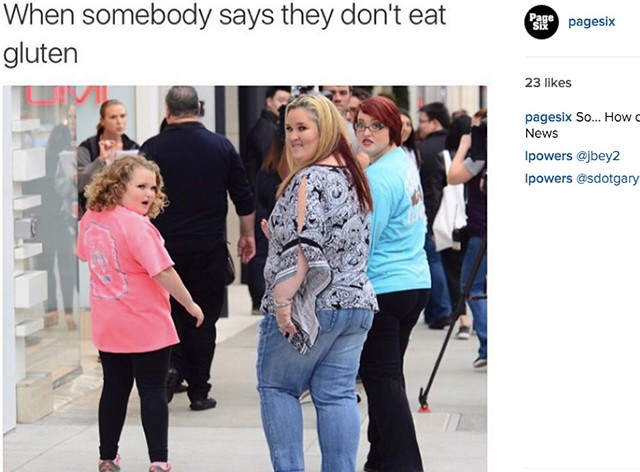 The ever consistent New York trolling Post is shaming bodies again. At least it’s keeping with their grand tradition of being a joke.

They just posted a body shaming meme, which is always a delight.

It’s a companion social media post on Instagram and Twitter that goes with their article today about how going gluten-free doesn’t actually help you lose weight, and get this. People who STOPPED eating gluten and then DID eat gluten again actually LOST weight. Miley Cyrus! Sprinkles, the cupcake company! Everyone’s going gluten-free, but one way of eating = not the best for every person ever, in case that was life-changing information.

The story’s reported well enough. They talked to real people with observations and thoughts, and a nutritionist with some true things to say about this. But none of this matters because they used this AWESOME meme depicting reality TV women who are obviously not the slim people they interviewed in the article. It’s of Honey Boo Boo and the squad. To the picture!

The meme depicts these TV-famous women who wear larger sizes. Even the wee child gets in on the good ole body shaming fun. It’s about people who don’t care for anyone’s BS dietary restrictions because they clearly couldn’t be bothered to find the will power to think about matters like their own health. They’re not in the upper tax brackets and they’re not the finnicky gluten-free dieters who are totally fooling themselves into thinking they’re healthier because they pretend to have a strict allergy to anything that isn’t gluten-free.

Suffice it to say that the theme of this cool picture is that eating well in general is solely the concern of slim people. Get it? It’s a joke about how RIDONCULOUS curvier women think it is when people avoid traces of gluten like they’re garbage bags full of bed bugs. Like, how Honey Boo Boo’s squad think women who restrict or monitor their intake of solids are CRAZY. They’re curvier, and so they think anything resembling nutrition is WHACKTACULAR.

Thank you, New York Post, for being gurus of life itself, bettering the world with every post. This is truly the posts of all New York Post posts.

Related Links:
I Loathe Everything About the New York Post Telling Carrie Fisher to Be Thankful Disney Told Her to Lose WeightNo, Body Shamers Don’t ‘Help’ Women Like Selena Gomez to Slim Down