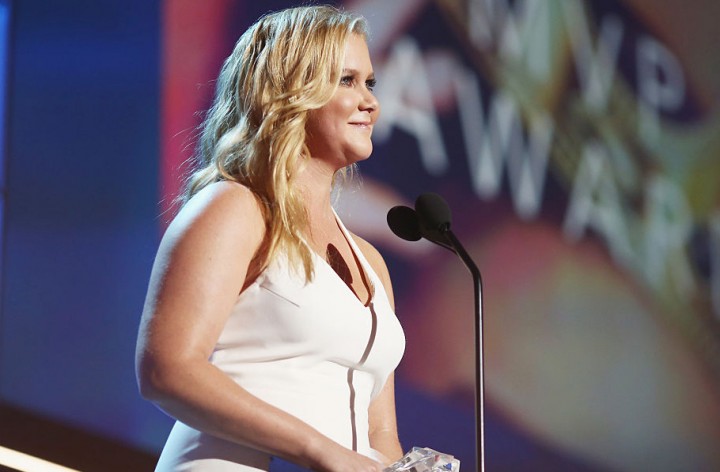 Clueless Men Defend Teen ‘Joking’ About Spending the Night With Amy Schumer
by Ashley Hoffman | January 19, 2016 at 9:48 AM

This 17-year-old civilian, Jackson Murphy, who claims he spent the night with her will never know. The movie blogger got to take a picture with her, and so when he posted it his sensible teenage way, he JOKED about how he was all up inside Amy Schumer. He said this:

“Spent the night with @amyschumer. Certainly not the first guy to write that.”

HAHAHAHAHA. Knees were slapped. She did not get the humor of it all, and so, in an effective use of her time, she addressed it flawlessly.

@LCJReviews @jondaly I get it. Cause I’m a whore? Glad I took a photo with you. Hi to your dad.

@amyschumer I truly apologize. Thought you’d like the joke. I should leave the comedy to you! Thanks for the photo. Glad you won last night!

The ability to distinguish between delusions and reality is overrated, so this kid will probably be fine. At least Amy is now aware of his existence, so that’s something. But people still feel bad for him. Poor kid. Who will sing this innocent young man’s song? Lots of people.

This is what’s troubling. Plenty of men have come to the kid’s defense on Twitter. Because they feel that this young guy claiming he had sexual relations with her is TOTALLY all in the same good fun as Amy’s occasionally raunchy jokes. Here’s what they’re saying as they equate this kid’s ridiculous public statement to her risqué comedy routines.

“You made a funny joke based on the same material Amy uses to make millions. It’s on her if she can’t take a joke.”-@AG_Conservative

“Her entire career is based on her alleged promiscuity. How is that not fair game to joke about?” – @NickNordstrom

“so what exactly our the power dynamics. She’s a powerful movie star and he’s a kid trying to be funny who she humiliated.” -@TyleKurner

The difference is, according to some, that Amy is famous so when SHE jokes about sex without lying about real people, it’s a laugh riot. But when a minor lies about bedroom pastimes with a famous woman and all the notches on her bed post, it’s just judged way too harshly.

Asserting you slept with someone and slut shaming them IS highly amusing humor. If things had gone a little better, these two human pieces of comedy gold would probably be on a blissful honeymoon right now. So here’s how it ended.

Dude who definitely didn’t get with Amy Schumer:

“Thought you’d like the joke. I should leave the comedy to you! Thanks for the photo. Glad you won last night!”

“I truly apologize for the tweet I posted earlier. I’m not a comedian and it wasn’t funny,” he said in another.

“That’s really okay honey. I just remember thinking you and your dad were sweet and it was a bummer to read that.”