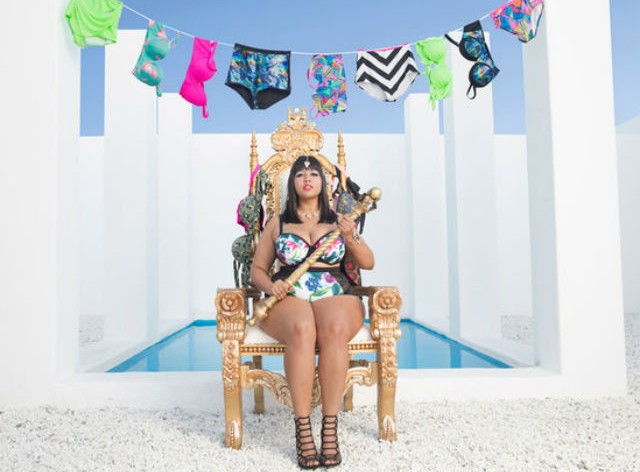 By now, you’ve probably heard the news. Hot blogger and creator of cool things you’d actually touch Gabifresh created her fourth line of swimwear for Swimsuitsforall. Pictures of her sitting atop a throne were scattered all over the internet this week. She was the queen of the bikini and the ruler of the pool, and we slurped up every minute of it like a boozey daiquiri.

The collection was buzzing hard and for good reason. The swimsuitsforall site was even unresponsive for some users on launch day,  Buzzfeed reported. Her collection actually caused an internet malfunction because of the swarms of people wanting in on the cool suits. One look at the designs and prints on these babies and it’s easy to see why. They’re actually trendy. They look like the stuff you’d expect to find straight size women chillin’ in on a boat in Cancun. Refinery29 was all over them. NYLON thought they were rad. Jezebel said they were “cute as hell.

The fact that people were THIS excited about cool bikinis for curvy chicks and the fact that Gabi BROKE the internet with her collection means something. It means that, like other areas of the fashion industry, this is another area where curvy women are often overlooked or just cast aside and assumed to wear a ruffled one-piece or (we’re screaming just thinking about it) a tropical printed tankini. The idea that curvy women can and actually do look hot as all get out in bikinis is still a relatively new concept. Shoutout to our girl Ashley Graham for helping to make the idea a bit more mainstream in Sports Illustrated last year. Now she’s got her own new line of cool swimwear coming out as well, so that’s something to help you get through winter.

But curvy women shouldn’t have to wait for a big name blogger or model to drop an annual collection to maybe get their hands on some cool beach attire, assuming the internet can withstand the demand. The cool swimsuits offered at places like Topshop, Nasty Gal, and Victoria’s Secret should be offered to women of all sizes. Sure, there are a handful of brands besides Swimsuitsforall that have a decent amount of wearable swim stuffs for curvy women like Torrid and Addition Elle, but other than that, the selection looks more suitable for the kiddie pool.

We know this is only just the beginning, and brands will get there eventually, and we’ll all be able to kick it in the sand in the same cool bikinis. For now, we’ll just continue to be thrilled at the thought of rolling up to some cabana hut this summer in Gabi’s ‘break the internet’ army green one piece and letting some basics know that we’re in charge.

Related links:
The Daily News Couldn’t Celebrate All Bikini Bods Without This Shakespearean Joke About Boobs
Rejoice! Ashley Graham Will Have a Sexy Collection With Swimsuits For All This Spring