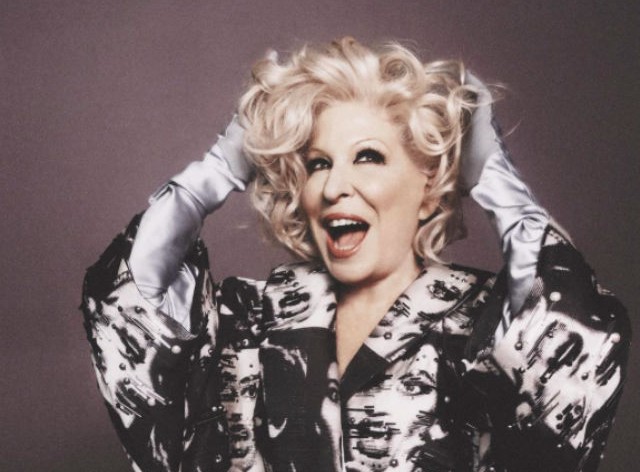 Bette Midler for Marc Jacobs’ Spring Campaign Is Absolutely Killer
by Eliza Dillard | January 15, 2016 at 11:08 AM

If the fact that it’s a long weekend isn’t enough to make you want to lather up your boobs in Cool Whip and do a cartwheel, well, here’s this. Expert gardener, actress, singer, and general hero Bette Midler is doing some cool things in the business of fashun this year. And by that we mean, she scored a slot in Marc Jacobs’ spring campaign. WIN.

Marc posted this heartfelt tribute to his life inspiration on Instagram.

What a privilege it is to know your heroes. My earliest memory of Bette Midler was somewhere around the age of nine years old. I remember (at that young precocious age) hearing about her performances in the basement of the Ansonia Hotel’s, Continental Baths. I vividly remember the genuine excitement and love I had for Bette’s music. I was curious and excited by her energy, power and the exuberance in her voice and bold, brassy glamour. To this day, I still credit Bette Midler (unbeknownst to her) with a large part of my foray into fashion design. At age ten when I discovered the image drawn by Richard Amsel for her album cover, I was so instantly enamored by the silhouetted Bette in a black dress wearing platform sandals with a wedge of red curly hair that I recreated it on the back of a jean jacket with acrylic paint and embroidery floss and proudly wore it to school. The onset of the spring/summer 2016 season began with my interest in the pride of being an American, however, I have always maintained that I’m a New Yorker above all else, a different breed entirely – one whom at nine years old is aware of the Continental Baths and more importantly the sexy, glamorous and sublime, Bette Midler. After a conversation with Katie Grand about New York nostalgia she had recommended a documentary on the BBC that profiled Bette throughout her career and New York City. While I have always felt a certain connection with and influence by Bette, the moment that struck me so profoundly was a statement she made about her footprints from the past disappearing as she retraced old haunts of her once familiar New York. It all felt so relevant and apropos of the pieces of the yet-to-be collection that lay before me weeks before the show. It reminded me of the pride I felt in having the privilege of calling myself a born and raised New Yorker. To her beauty, her brass, her glamour. To that energy, vitality, verve, nerve and curve… I’m so happy to share this beautiful portrait by David Sims. Ladies and Gentleman, the Divine Miss M!

We can’t get enough of this photo, which was shot by David Sims. The top is killer and dramatic, just like the babe wearing it. The long satin gloves on her hands remind us that, yes, Bette will always be royalty and we should all be thankful she took a timeout from blasting the government on Twitter to pose for this shot.  She’s even got that fresh-out-of -the-salon, ‘I can’t believe these icy golden locks are MINE’ look down pat. You go, Bette.

We love any time a brand reaches beyond the Kendall Jenner’s of the world to be the face of their company. Last year, Marc Jacobs tapped dark gypsy goddess Cher for a spring campaign, and that was legendary. We all know the fashion industry needs continuous reminders that being over 50 doesn’t mean you’re rapidly pounding at death’s door, so it’s cool that he grabbed a babe like Bette for this one.

We’re toootally here for this. Bette for Marc Jacobs is the wind beneath our wings. And just for old time’s sake, here’s a First Wives Club throwback. You don’t own Bette, but she definitely owns you.