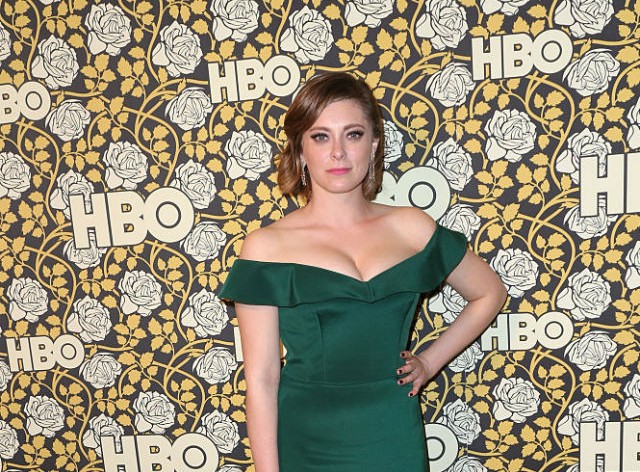 Rachel Bloom Says She Had to Wear Layers of Spanx and a Corset to Fit Into This Dress
by Eliza Dillard | January 11, 2016 at 1:57 PM

Your favorite crazy ex-girlfriend Rachel Bloom was doing things last night, in case you didn’t hear. You might’ve given the thumbs up to the sexy, fitted emerald green number she wore to the Golden Globes, but what was underneath that dress was an entirely different, horrifying story.

On the intense struggle to dress her cleavage and “real girl body” (her words), Bloom told Elle.com:

“Here’s the thing: I’m wearing a corset and two pairs of Spanx over it under my dress,” she said. “Because the Spanx cover up the lumps of the corset. That’s what busty girls have to do! I basically look like a pirate wench in my undergarments. But my dress was designed for me, which was so amazing. Curvier ladies can’t just throw on the runway look. It just isn’t made for boobies and butts and stuff like that.”

Nope, nope, NOPE. We’re honestly amazed Bloom had any breath in her to speak at all on the red carpet because sweet mother of Mary the idea of a corset and two layers of Spanx makes us feel like we just ran a six minute mile. We knew the struggle of having curves in Hollywood was hard but THIS? This is downright torture. She looked hot, of course, but she might need some get well soon cards to recover from that fashion sacrifice.

Unfortunately we know all about designers who avoid accommodating hips and other “stuff like that.” Somewhere a Neiman Marcus cashier is cheering because she took the security sensors off of Bryce Dallas Howard‘s buzzy size 6 dress. Lucky for Bloom, Christian Siriano was generous enough to offer her some extra fabric to cover her hot bod at the Globes. But apparently even when you get a custom-made gown for a red carpet event, it’s still the ultimate struggle containing your curves.

Another year, another struggle for curvy stars in Hollywood. We’re just glad to see more stars opening up about what it’s really like to find something halfway decent to rub shoulders with Leo Dicaprio in. Sidenote: we never thought we’d hear ‘pirate wench’ in a Golden Globes outfit discussion, but the world is full of surprises.

To watch Bloom sing a sexy Golden Globey song and attempt to move/breathe in this getup, here’s this.

A Size 6 Celebrity Is Major News Because Designer Options Are Still Totally Screwed Up
Dascha Polanco to Exclusionary Designers: ‘I Don’t Have to Dress With Your Clothing’