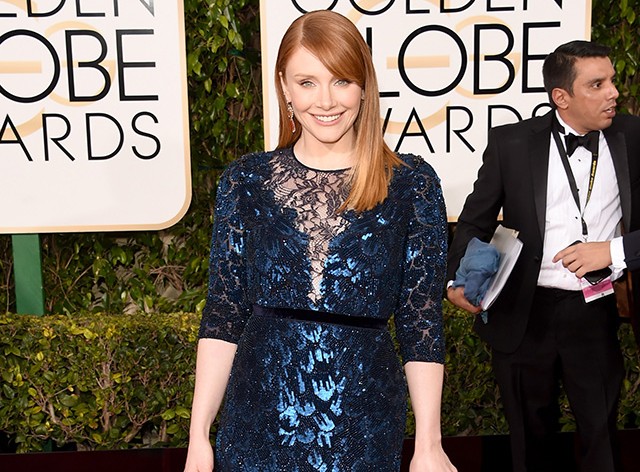 A Size 6 Celebrity Is Major News Because Designer Options Are Still Totally Screwed Up
by Ashley Hoffman | January 11, 2016 at 11:05 AM

Hope for glam at every size is something women are running out of.

Did you hear the one about the celebrity who wears a size six? Last night at the Globes, Bryce Dallas Howard talked about how she BOUGHT her Jenny Packham dress in a radical size six at Neiman Marcus. And that was news enough to supply the headline for the biggest voice in fashion. The Washington Post’s Robyn Givhan said…

“it was the 10-second comment that Howard made about the origins of her dress that sent a ripple across social media and, perhaps, if we are lucky, landed like a reprimanding thud within the fashion industry. Packham had not created the dress just for Howard. It was not borrowed. Howard had purchased it. Purchased it. At Neiman Marcus.

Why? Because she said it was nice to go into a store and have lots of choices in a size 6, which in the wider world is quite petite but in the realm of actresses is edging towards plus-size.”

So status of the shopping struggle = so so real even for a shine-emanating presenter at the Golden Globes. Howard actually went shopping because she had a wackadoodle idea that she should have options. She simply told Giuliana Rancic:

“I like having lots of options for a size 6, as opposed to maybe one option, so I always go to department stores.”

It’s not always phony pleasantries in these interviews the way Givhan says it is. Celebrities have the floor and they know it. After so many years of interviewing celebutantes, I can safely conclude that famouses DO provide real answers that they didn’t plan, so Howard’s comment wasn’t the most ridiculous truth bomb ever dropped on the carpet. It wasn’t the “I’m about 160 pounds and I can catch a D whenever I want,” statement either. But it was the most important to us from last night, and it had to be deliberate.

It came from a presenter who didn’t wear something with a slit up to her hooha, who wasn’t a gigantic name, who wouldn’t otherwise have been major news. Poised and charming, Howard said what she had to say in front of her antsy interviewer. It was endearingly frank, and people immediately seized on it as a call to action on Twitter.

So by busting out this one-liner about how she had to turn to a pricy department store, she prompted all of the tweets which spoke a resounding truth: plenty of designers only do sample-size at least in this realm, when it means the major leagues of exposure. That means, if you’re a size 6, you’ll have limited things to choose from like only one, and you’ll have to do your own shopping among the normals.

How is a size 6 excluded? It lays bare the tyranny of old beauty standards. If movies are down to look slightly more size-inclusive here and there, designers should have to supply stuff with which to cover their bodies in chiffon. But they’re still not doing it. The idea that a woman who wears a size six is still not a valued customer, or a cool enough body to get some beautifully crafted free designer swag…it shows you just how screwed up it all is.

While most of the attendants swanned around clad in the requested dress code of shiny with a generous dose of skin, Howard’s department store buy was a very adult choice. It looks like what she likes to wear.  She doesn’t have the same dressing challenge that curvier women face because she is simply a size 6. (The scallop-sequined A-line georgette gown is $4,800.) But it could also be a very fancy tablecloth at a Game of Thrones theme party, and Howard would look right at home at a semi-formal wedding. Naturally, she would have been up for something even more couture if it were actually available.

It’s important to note that there were women in Hollywood on the carpet last night who have been many many sizes. There were women who wore larger sizes than Howard. Melissa McCarthy has flat out come out and said that designers refused to accommodate her with dresses FOR THE OSCARS. Last year at the Globes, McCarthy dressed like Keira Knightley if she were a fancy boy on a box of French chocolate. This go-around, she wore a much more feminine metallic getup, but she should and could have been gifted a much more refined dress. It wasn’t too different from this VERY silvery Eloquii wrap dress Rebel Wilson wore. Christina Hendricks is another famous who people don’t seem to be able to provide a decent dress worthy of her body type + fame levels.

Dascha Polanco, as my esteemed colleague has pointed out, has said that she will bypass designers who don’t bother with her because she’s not a sample size. Guess what. Your clothes are unnecessary, and she’ll take her dough elsewhere. She recently said:

“You know, it just goes to show I have a decision as well. I don’t have to dress with your clothing. It’s not me waiting for you to dress me now. I choose who I want to be dressed by. So, times are changing and little by little the barriers will be broken. It’s a process, step by step. And I’m pretty sure I’m not the only one who feels that way.”

When we asked readers to tell us which designers they’d like to provide more sizes, several echoed this by saying if they’re not addressing all women, they don’t deserve your money.

If the holdup is that designers are afraid of not doing these women justice, then that’s getting old. Why does everybody have to look like they’re wearing wrapping paper when they wear above a sample size? In a fairer world, the Hollywood elite would be flooded with free stuff that looked good, and people would all get their shot at having a moment. (Yes that is important because the female folks at home need this inspo in their lives.) That moment is not now, in 2016 when everyone is raving about how much love curvier women are getting. But for now, you can get by on Leonardo DiCaprio’s face.

Related Links:
RunwayRiot Live-Blogs the Golden Globes Red Carpet Fashion
Dascha Polanco to Exclusionary Designers: ‘I Don’t Have to Dress With Your Clothing’