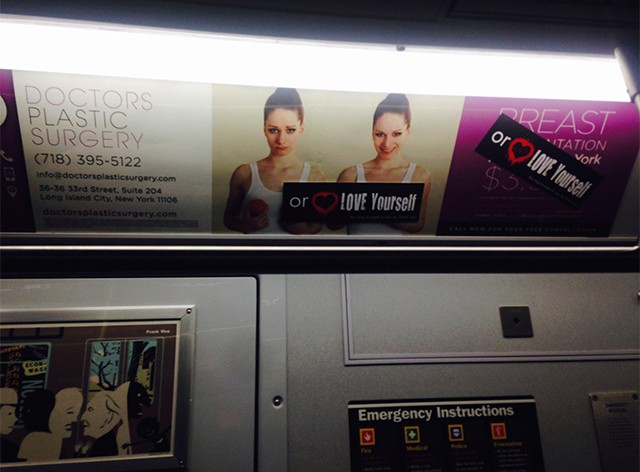 People Are Protesting Awful Breast Augmentation Ads With ‘Love Yourself’ Stickers
by Ashley Hoffman | January 6, 2016 at 9:12 AM

If you aren’t onto these ads, the Doctors Plastic Surgery ads show a despondent woman holding fruit in front of her depressingly smaller boobage. Her life sucks because her boobs aren’t larger. But then the fairy godmothers of cosmetic surgery intervene and she gets some larger yabbos and a million-watt smile. (You know she’s doing life better because the size of her tropical fruit props double in size so it’s a Cinderella story for the ages.)

According to the site, the Love Yourself Project is an organization that “seeks to organize and curate community art exhibits to showcase the work of artists who are traditionally underrepresented. Artists’ work will be selected based on its ability to communicate within the conceptual vein of self-awareness and reflection.”

This offensive plastic surgery ad, telling everyone that smaller cup size=SAD GIRL, larger cup size=JAUNTY girl is the worst. (It’s even worse than this boob-shaming ad from a million years ago.) Other stickers have protested these ads before, and we’re thrilled that people continue to disrupt this dumb message.

Let’s just establish that changing your appearance with a breast augmentation, a breast reduction or any kind of elective surgery is entirely up to each woman depending on what breathes life into her #goals. Altering something doesn’t mean you don’t love yourself (obviously). But we feel the opposite of love toward this particular cosmetic surgery ad because it’s GARBAGE. That’s why the people covering the “after” picture with this sticker are excellent in our book. We were equally excited to hear teen students on the train saying that the ad is “degrading to women,” because you know, young women know what’s up.

Not everyone’s New Year’s resolutions have to do with an external makeover, despite the fact that the media loves to deliver the message that when CERTAIN body parts are larger, your life will suck less. Obviously we don’t need a sticker to tell us this ad is the brainchild of the brainless, but three cheers for the people who made us see less of it with these stickers.

We want to know. What do you think?

Related Links:
My Problem With the Cosmetic Surgery on The Real Housewives of Orange County

Tags: plastic surgery
About the Author