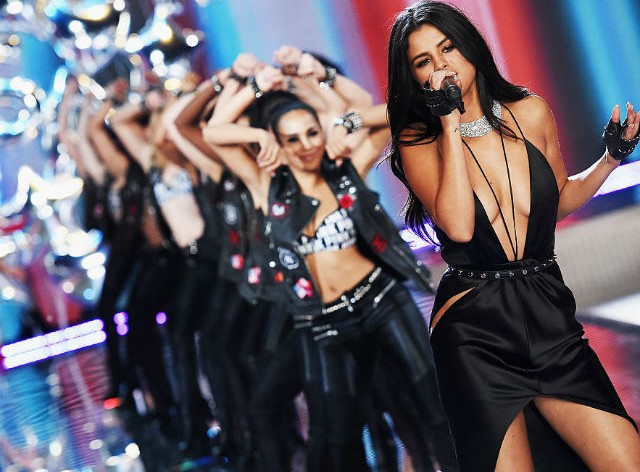 Selena Gomez Admits Performing at the Victoria’s Secret Fashion Show Made Her Want to Stop Eating
by Eliza Dillard | January 4, 2016 at 4:23 PM

Surprise! Another reason getting drunk is the only reasonable way to tolerate a completely straight size Victoria’s Secret Fashion Show. In an interview with Rolling Stone, Selena Gomez opened up about what it was actually like to perform at the annual event this year, and it wasn’t all confetti and kisses, as you might imagine.

When asked if there was a pillow fight backstage, she gave us this revealing little gem, “No, but, man, it makes you want to work out and not eat anything. I did feel really short, but it was really fun. And the pressure wasn’t all on me. It was great to be able to dance with these beautiful women.” Oh, okay.

We’re glad she had fun shaking her hips with the slim Angel cohort, but it sucks when even a celebrity feels out of place because of the sizing standards Victoria’s Secret sets for girls wearing their glammed up angel wings. As if singing in front of an audience of millions isn’t hard enough, feeling like the oddball of the crew probably wasn’t helping Selena hit the high notes. It should also be a red flag to the company when that same performer feels the desire to, ya know, STOP EATING because she can’t identify with any of the tall, sample size models dancing to her jam. Sigh.

Selena could have been spared this awkward situation had Victoria’s Secret been friendlier to women with curves but whatever. We’re blue in the face from spitting out reasons why the company needs to spice it up in the size diversity game.