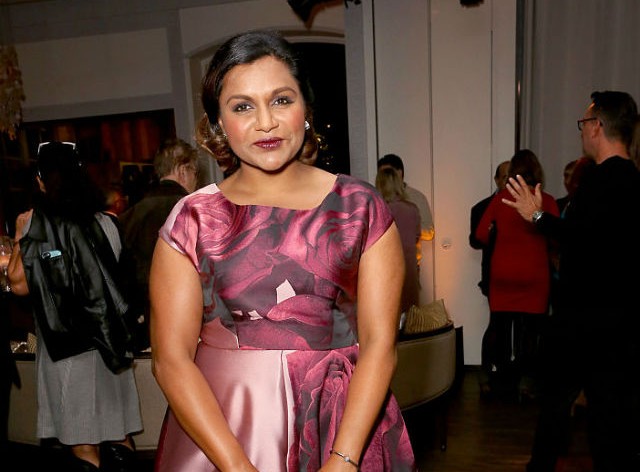 6 Reasons I Wish Every Celebrity Were As Real As Mindy Kaling on Instagram
by Eliza Dillard | January 3, 2016 at 9:12 AM

Mindy Kaling has never given me any reason to believe I wouldn’t want to be her best friend, but I recently took a little year-end peruse through her Instagram account just as a ritual to give thanks for celebrities who don’t make me wish California (Hollywood) would get swallowed by seawater. Obviously Mindy is hilarious, but she’s also one in a handful of celebrities who keeps it so real on social media. When other stars are over on Instagram flaunting their Escalades and diamonds bigger than Brussels sprouts, Mindy’s not afraid to just throw all cares to the wind and be 100% herself, a.k.a like the cool, body confident older sister you always wish you had.

She’s someone to turn to when you need a good ‘ole fashioned dose of body positivity, and at a time when retouching your selfies to the point of being unrecognizable is easier than ordering Domino’s, Mindy is top on the list of celebrities who are a breath of fresh air for all of us who have ever asked, “What’s a FaceTune?” Here are six reasons why I wish every celebrity would take some notes from Mindy’s book on how to be the realest in 2016.

1. She doesn’t pretend she’s perfect. Look, Mindy gets it. Nobody wakes up looking like Beyonce in Austin Powers in Goldmember (or Beyonce in anything, for that matter). And she’s not afraid to show those less glamorous moments that might make a Kardashian cry. You know, those prime moments when most people would rather slowly start digging themselves a hole to China than pose for a selfie.

Like the time she pointed out that, why yes, she does sweat when she exercises.

Or the time she revealed that even celebrities aren’t exempt from oily skin and sometimes they need to mix up a weird potion to remedy that.

Sometimes I put glop on my face for beauty reasons. This one was cheapo and fun to mix and really worked. I don’t get paid by them or anything! Just have mega oily skin and @clarisshair and @jankinjo recommended this on book tour. It works! Plus it makes me look frightening. A photo posted by Mindy Kaling (@mindykaling) on Sep 30, 2015 at 6:43am PDT

Or the time she took a selfie covered in zit cream just cuz. HERO.

That zit cream in your 30’s life. At least I’m not going on the Tonight Show later today. ????

2. She promotes natural beauty. While other celebs act like they’re doing the world some holy favor when they prove they can exist without makeup on, Mindy just slyly lets one slip in. When there are celebs like Ferne McCann out there preaching twisted wisdom about being natural on social media, thank god Mindy’s here to save the day and show us that makeup really aint no thang.

She knows she looks hot, too. Just another reason she should be your spirit animal.

No makeup, no shower, blindly dressed myself, still killin’ it A photo posted by Mindy Kaling (@mindykaling) on Jul 16, 2015 at 6:46pm PDT

Here she is, modeling some sweet sunglasses that gave her an unnecessary excuse to go makeup free.

No makeup needed when I got my @dannijo on. @thealistofficial

3. She consistently posts photos in pajamas and sweats because she realizes comfort should always be top priority.  Mindy knows there’s no shame in wearing yoga pants when you’re going everywhere but the yoga studio. She doesn’t need to be working on a revenge body to wear Nike. Balmain is (sometimes) cool, but at the end of the day, nothing’s more like a hug to the soul than a comfy pair of sweats, and Mindy respects that. Take notes, everyone else.

Like this time she wore a Tory Burch workout set while pretending not to hate yoga.

In breaking news today, @toryburch makes hella adorable and flattering workout clothes. Now when I pretend I just came from yoga, I can do it in style! ???????????? A photo posted by Mindy Kaling (@mindykaling) on Oct 5, 2015 at 7:41pm PDT

The time she made you wish you were cool enough to get invited to her birthday party.

Part of my birthday is we got to wear pajamas and we are watching It Follows at lunch.

Or the time that she made moth holes in sweatshirts trendy.

“How you gonna be a baller when you have moth holes in your sweater?” – Miseducation of Mindy Kaling A photo posted by Mindy Kaling (@mindykaling) on Jun 3, 2015 at 10:10pm PDT

4. She embraces her curves. Mindy’s one of the few celebrities of a certain size that Hollywood has given us, so thank Saint West she doesn’t shy away from talking about or showing off her curves.

When you split the seam of your dress doing some physical comedy because you have a big butt and you need to be sewn up. Glenn is brave. #themindyproject

The time she gifted us some cleavage in this pregnancy suit.

That pregnancy suit in the dead of summer life #98degrees #themindyproject

5. She doesn’t pretend like she doesn’t enjoy junk food. Other than Chrissy Teigen, most celebrities wouldn’t jump at the chance to showcase the fact that they eat snacks you could find at Target. Mindy’s a general reminder that juicing and Hollywood don’t have to go hand-in-hand.

Like the time she made you wish you still kept a candy stash in your pillow.

The time she gracefully twirled her spaghetti noodles.

Or when she smuggled Ben & Jerry’s in her arm crevice. We’ve all had those days.

6. She works like a boss, but she’s not afraid to let her locks down and have some fun. Sure, a chunk of Mindy’s Instagram posts are from late night shoots or chillaxing on set with her team, but when she lets loose, she knows how to turn up.

I did it! I drank four pina coladas a day!

If every celebrity I followed on Instagram were as cool, real, and spirit-lifting as Mindy, maybe I wouldn’t constantly feel the urge to throw my phone in front of a moving bus. Never change, Kaling. Never change.