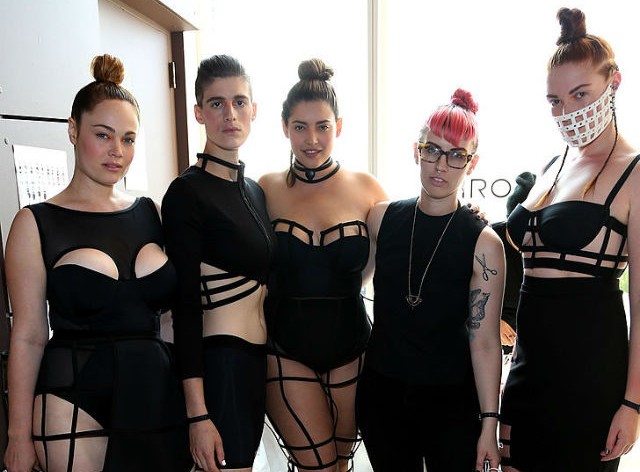 How the Media Fanfare for David Bridal’s Curvy Model Proves How Far Behind We Are
by Eliza Dillard | January 1, 2016 at 9:12 AM

A few weeks ago, David’s Bridal (finally) featured a curvy model in a campaign because I guess it finally dawned on them that, hey, curvy women might eventually walk down the aisle too. The fanfare was intense – Time, People, and Huffington Post, among others, raved about the revolutionary idea to feature someone with hips in a wedding dress. As the coverage erupted like Vesuvius, I thought to myself, when was the last time someone who doesn’t watch TLC or read The Knot cared about anything David’s Bridal did? Has the store ever been this relevant? Unless the company featured a notable celebrity, a bridal nip slip, or a model of a certain age in a campaign, not much else would draw that much attention to an ad for wedding dresses. The fact that the company featured someone relatable to the majority of women was clearly a notable achievement and got its fair share of press.

But David’s Bridal isn’t the only time a curvy model has gotten widespread media attention. Perez loved the inclusion of Ashley Graham in LOVE’s advent calendar, and USA Today raved about that time her hot body was in Sports Illustrated. When Clementine Desseaux was named the face of Loboutin’s beauty line, the Internet threw a party and made a few inappropriate jokes. When some smart designers decide to throw some curvy models in the mostly straight-size mix at NYFW, the media has a field day. For every “plus size” accomplishment, there seems to be an explosion of coverage that doesn’t happen for straight-size models. And I get it. It’s still relatively new and exciting to have brands on board with women who can’t fit into a sample size. The underrepresentation of curvy women in the media seems to be slightly compensated for in the fact that, when a curvy model does land a gig, EVERYONE talks about it and points out how great it is. Suddenly, every media outlet with a pulse is hopping on the body positive bandwagon.We celebrate this stuff at RunwayRiot as well, but that’s our site’s mission and focus. Time doesn’t exactly make a routine effort to cover what’s trending for brides-to-be.

The fanfare feels like a double-edged sword. Obviously, we want curvy models to get media representation, and the more awareness the media brings to the lack of curvy models in the industry and the more people celebrate, chant, and cheer (us included) when Denise Bidot walks in a cool cage thing for Chromat. So the higher the chances are that maybe fashion designers will see that there’s a real demand for fashionable clothes for all women.

But at the same time, the media freak-outs every time some curvy model walks the runway or gets a campaign feels like it’s just widening this rift between curvy women and the fashion industry. It further highlights the fact that, yeah, this isn’t something we see every day, which makes it difficult for people to accept curvy models as the norm when every accomplishment no matter how small is followed up with balloon releases, think pieces, and praise by publications that wouldn’t otherwise go for a fashion story. It also points out the sad fact that there is such little body diversity in the fashion industry that David’s Bridal throwing curvy women a bone feels significant enough to get an entire segment on Good Morning America.

I recently heard someone say, “Plus-size models are trending so hard right now.” Like they’re going to be out of season in a few months or something. And I think the ‘trending’ mindset is something that’s worth addressing here as part of the problem. With the amount of coverage any given curvy model gets for doing something cool in fashion, it’s easy to feel like it’s all one big PR stunt and not a well-intended move on the brand’s part to be inclusive. But curvy models aren’t a PR stunt. Curvy models aren’t a trend. They’re here to stay. If we can get past the ‘shock value’ aspect of seeing a woman with hips in a swimsuit ad, maybe then we can just accept it for what it is: life.

If brands (lots of them) start featuring curvy women in big doses, all at once, the media will eventually run out of money to hold metaphorical celebrations every time a curvy model looks sexy in the name of fashion. Models who wear larger sizes won’t be major news anymore, they’ll just be accepted. But clearly that won’t happen overnight, and for now all we’re getting is a sporadic feature here and there, and naturally, the media will continue to pick up on that.

We’ll take it, of course, and we’ll be happy that curvy models are getting their ‘moment,’ but the industry needs to hurry up.

Of Course Love Used This ‘Juicy’ Fetish Song for Ashley Graham’s Video
Q&A: Model Denise Bidot Talks Opening for Chromat and Being on the Frontlines of a Changing Game