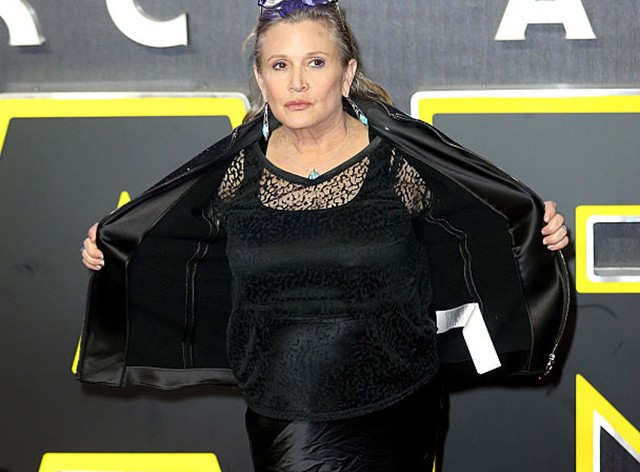 I Loathe Everything About the New York Post Telling Carrie Fisher to Be Thankful Disney Told Her to Lose Weight
by Ashley Hoffman | December 31, 2015 at 10:39 AM

You may have heard that esteemed trolling newspaper the New York Post ran a story by Kyle Smith, voice of reason to the stars. He wrote it about how angry Carrie Fisher should be happy Disney told her to lose weight for her role in The Force Awakens. Because being slim is the reason we care about her, and she should be healthy.

Let’s just go through all his non-thoughts presented in this story in an orderly fashion like it’s a fire drill.

“Imagine a Scott Weiland story on his 65th birthday in 2032: “Weiland: Those Record Company Bastards Pressured Me To Give Up Drugs in 2000.“

Greeting the day by shooting heroin in your eyeballs and being told to get down to a weight that Disney — not a doctor — allegedly decides are equitable now?

“Or 2001 lung cancer victim George Harrison still being around to angrily promote the Beatles on Spotify this Christmas Eve: “Harrison: Paul McCartney Bullied Me Into Playing Guitar on ‘Maxwell’s Silver Hammer,’ Giving Up Smoking in 1969.”

As in, his actual talent? Smith says nothing about the blatant sexism in movies that allowed Kevin James to play a woman’s obsession in Zookeeper while Rebel Wilson had to play a suspicious charity case in Bachelorette. If you didn’t see it, “why on earth would this hot guy want to marry her” is a question Wilson’s character’s best friends asked in the movie.

c) About the chain smoking he mentions above:
We’ve heard comparisons between smoking and weight before, and there’s more to this story that we can all phone a Doctor friend or open a fortune cookie to find out about. But filing his criticism of Fisher’s right to her own body under things that make you go “nope.”

Disney “didn’t love her weight,” he writes. Actually, even though Fisher was the only woman who could play this role, according to her, her ability to do her job was based on it. IF she were playing a character who enjoyed the thrill of a CrossFit infomercial, sure. But this? No woman playing the natural progression of her younger character should have to deal with a specific number of pounds to drop in order to be a more watchable human woman.

Real talking Carrie Fisher told Good Housekeeping UK this: “They don’t want to hire all of me — only about three-quarters! Nothing changes, it’s an appearance-driven thing. I’m in a business where the only thing that matters is weight and appearance. That is so messed up. They might as well say get younger, because that’s how easy it is.”

Smith, then instructs us further:

“Not really, because while it isn’t possible to get younger, it is possible (not to mention beneficial) to lose weight, which is exactly what Fisher did.”

This was as helpful as it gets because without him, we wouldn’t understand that while you cannot turn back the clocks of time without Harry Potter’s time turner OR anti-aging cream peddled by Kylie Jenner, you can get your body in gear and she’s living proof. And yes, becoming younger is impossible, and yes, losing weight is not. But we kinda knew that shedding pounds was possible. That doesn’t mean this weight loss demand on her isn’t sexist, phobic about weight, and everything we hate.

“What’s surprising about Fisher’s comments is the note of weary resignation about the importance of “appearance” in the movie biz.”

Is it? The fact that more women are talking and tweeting about this garbage means we might get somewhere in a galaxy far far away oneday if we close our eyes and wish real hard.

“No one would know the name Carrie Fisher if it weren’t for her ability to leverage her looks. George Lucas only cast her in the first place because she was young, slim and cute at the time.”

The writer was probably on Snapchat with George Lucas during this part of the story to confirm that yes, Carrie Fisher’s fame was completely secured by the fact that she USED TO BE a looker, and that her prettiness score is decreasing as her weight ticks up in Disney World and she should accept it.

“(She turned out to be a talented writer as well, but it’s an open question whether the second career would ever have gotten off the launch pad without the fuel provided by her first. Mostly she has written about what it’s like to be Carrie Fisher.)”

We see this with modeling all the time. You don’t like being told what not to eat and what sexist things to put up with? Then get a real job, you entitled greedy person. So women have to give up all their rights even at Fisher’s fame levels when she’s playing a woman who is older?

“Fisher is a public figure. If she didn’t want the public to talk about her, she could have spent the last 40 years teaching kindergarten.”

HAHAHAH I hate him. One thing is true. Thrusting yourself in the public spotlight invites people to discuss things, but the fact that it’s all about HOW MUCH SHE WEIGHS just proves that women are entitled to NOTHING.

“As for whether it’s “messed up” for Hollywood to prefer pretty people to appear in its films, Fisher made millions off being pretty.”

That it? Prettiness? She’s loaded, so she should accept being reduced to a number on a scale. Got it.

Guru of life itself, the guy tells her to count her blessings.

“Far from being bitter about this, she and other actresses who profited nicely from their looks should be grateful they had a turn at the top.”

“That’s more than average-looking people ever get. As for Disney’s “pressure” to lose weight, she should be even more grateful for being nudged to get healthy.”

Completely heartfelt reminder for your insight. We’ll accept the nonsense reality that actors are still expected to be slim for most roles if they want to crack Hollywood. But this woman IS THE EMBODIMENT OF THE FORCE who is older and a shoe-in. Thanks for reducing her formidable career to a gold bikini bod. Anyway, as usual, it’s a great day to be a woman in Hollywood.

Ok, I quit acting. NOW,can I not like being judged for my looks?Tell me what to do & who to be, oh wise New York post columnist.u GENIUS