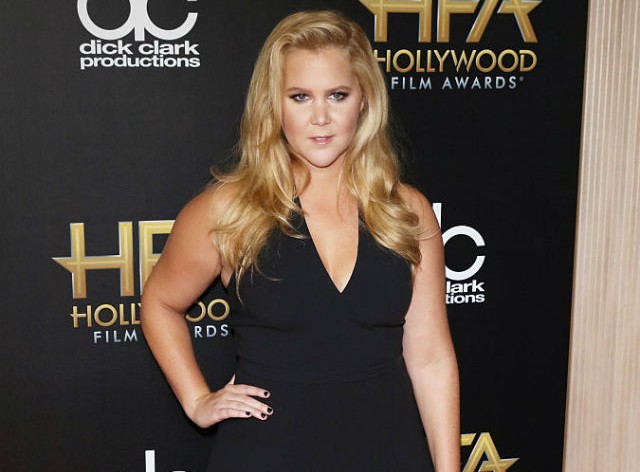 Amy Schumer is back to her old habit — making jokes about being relevant in the fashion industry.

Recently, she tweeted this photo of herself and pals Rachel Feinstein and Bridget Everett holding drinks (and dogs) and being generally exhausted from looking hot and strutting down a catwalk or something.

We are exhausted. 4th show we are walking in today #fashionweek @bridgeteverett @RachelFeinstein #poppy pic.twitter.com/uZg3bD5nnr

Amy looks pretty peeved, like some bartender just yelled “last call.” Or maybe the fire behind that stare is due to the fact that, yeah, women with curves still aren’t widely accepted on the runway despite Amy’s clever attempts at fooling people into believing that she was a Victoria’s Secret Angel and even at the Miss Universe pageant.

While people are getting their kicks out of the fact that Amy and co and “#fashionweek” would ever be in the same sentence, we’re over here waving our arms like we’re directing airplanes on the tarmac saying, “Hey, can we actually get some more women with curves up in this place so Amy’s jokes stop being so relatable and funny to people?”

We’re still holding out for the day when Amy tweets a half-naked selfie from a runway that she actually is slaying because, at the rate that she’s dropping these subtle hints, it has to be soon, right? Fingers crossed. Anywho, we’ll be just be over here having whatever she’s having in that glass and anxiously refreshing our feeds until the next Schumer vs. fashion industry update comes in.