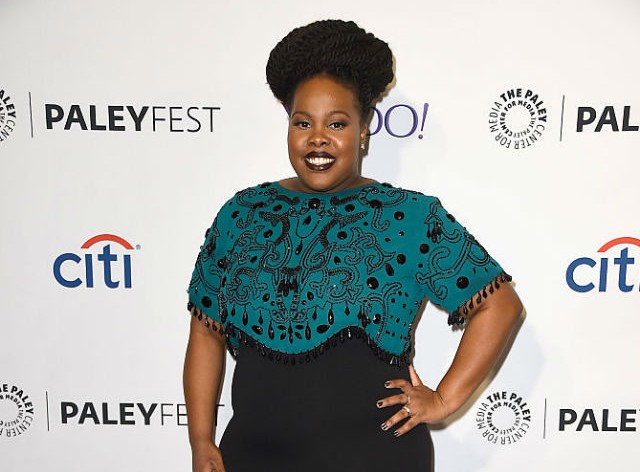 Amber Riley Has to Worry About Other Curvy Celebrities in the Same Look on the Red Carpet
by Eliza Dillard | December 30, 2015 at 4:37 PM

Last night three household names weighed in on an issue that keeps us up at night over here at RunwayRiot: WHERE ARE THE COOL CLOTHING OPTIONS FOR CURVY WOMEN?

Blogger babe Gabi Fresh went on a Twitter rant about the struggles of finding something cute to wear to an event, and actresses Danielle Brooks and Amber Riley piped in to echo that the struggle is so, so real, we discovered via Seventeen. Danielle’s no stranger to repurposing a dress with some new bling and shoes because, well, things are still THAT bad.

Obviously, dress options for curvy women that don’t include some strange print you’d rather see on a rug are few and far between, but Amber Riley brought up a point we hadn’t covered much until we caught wind of this conversation. She tweeted this:

@gabifresh and I LOVE fashion and clothes and being original. Makes it hard when there are only 5 stores that sell the same things

@gabifresh in my size. Risking seeing other plus celebs wearing the same ???? on the carpet *throws up hands* we can’t win ???? — Amber Patrice Riley (@MsAmberPRiley) December 29, 2015

So not only do celebrities with hips have to worry about normal red carpet things like tripping and outshining every other star in their vicinity, but they also run the high risk of matching another curvy star because of what few fashionable things are out there that stars would actually want to wear on a red carpet. Straight-size actresses really have it made in the shade with the abundance of trendy little numbers out there. We’re pretty sure a red carpet “who’s wearing it better?” brawl isn’t a major concern they tweet about in their spare time. Probably because they’re too busy shopping for cool clothes to add to their closets.

Whatever. Designers? Hello? Are you FINALLY there? Because these ladies are fed up, highlighting yet another reason why fashion needs to get it together.

Dascha Polanco to Exclusionary Designers: ‘I Don’t Have to Dress With Your Clothing’
Designers Are to Blame For Size Standards in the Modeling Industry Too
Model Georgina Burke on Her Impossible Quest to Find Clothes that Fit

Tags: Plus-Size Clothing
About the Author