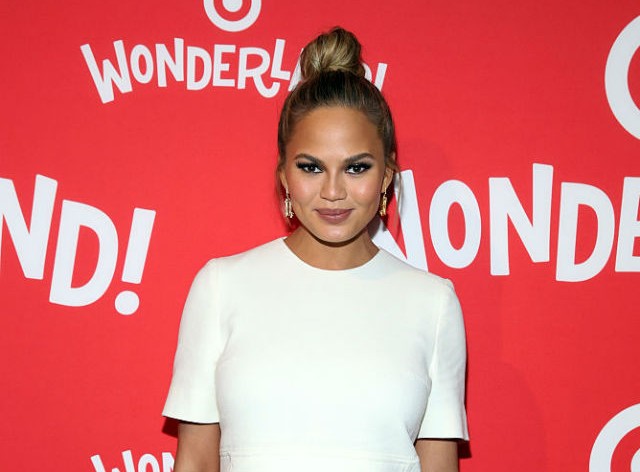 Bored People Are Concerned About Chrissy Teigen’s ‘Armpit Fat’ in This Photo
by Eliza Dillard | December 28, 2015 at 10:18 AM

Chrissy Teigen showed off her baby bump to the Instagram world over the weekend as a post-holiday treat.

She looked like she was ready to hit the sand with a virgin daiquiri in her pinstripe one-piece, but her baby bump wasn’t the talking point of the photo. The vases or the Titanic-like painting behind her head? Nope. It was her “armpit fat.”

Obviously some commenters were coping with their post-holiday boredom by scrutinizing every inch of Chrissy’s body when they looked right past the baby bump and zoomed in on the bump under her armpit. They decided that the armpit lump Chrissy was showing off was a major cause for concern because Instagram is the place to go when you aren’t certified to dish out medical advice on WebMD. Chrissy appreciated the concern, but she had to keep it real. She let everyone know the bump was just a little “armpit fat” because, ya know, she’s pregnant. Also, armpit fat that shifts when you’re posing like a sorority girl is totally normal.

Clearly the people concerned about her pits have only seen armpits like those of Karlie Kloss and Kendall Jenner — pits sans bumpage whichever way they turn to blow a kiss. Whatever. Thank you Chrissy for calling out people sticking their noses in armpits where they don’t belong.