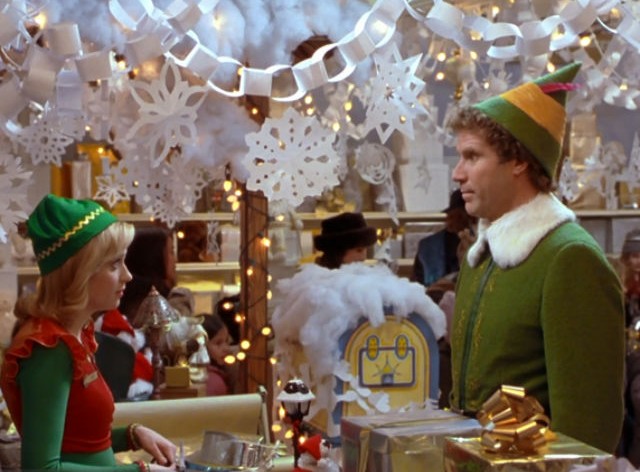 Two years ago, I was a Parsons graduate student in the New York state of mind, which is probably the only way I could ever rationalize my willingness to accept a job at the largest department store in the world. My FIRST EVER retail job was in Holiday Lane, the holiday section of Macy’s in Herald Square. It’s the store that basically invented Christmas—the original miracle on 34th street.

Holiday lane was nestled in the middle of the 9th floor and, unlike the rest of the floor, Holiday Lane’s floors were lined with red carpets that were dusted with glitter from all of the sparkly nicknacks we sold. From carpet to ceiling, the section was packed full with Christmas merchandise—from nutcrackers to nightlights to light-up Christmas villages. There were at least 25 fake, 7-foot Christmas trees, and they weren’t just your average trees you’d see in Target. The special thing about these trees is that, on almost every branch, hung an ornament.

The ornaments were packed so tightly on any given tree you’d be hard pressed to find an empty branch. Thousands of different ornaments that you never even knew existed— squirrels, Santa hanging out of a taxi, wine bottles, a woman doing downward dog—they were all in Holiday Lane, and they all had their special place on their designated trees. There was an entire section devoted to New York and the Macy’s Thanksgiving Day parade, a collectibles room, a room filled with tree toppers and lights, entire trees with animals, pink trees with cell phones and poodles, entirely gold trees, entirely silver trees, life-size stuffed golden retrievers and polar bears. The whole section was like the prop room for Elf. I loved Christmas, so working in a place that looked like the North Pole was fun for a while, but, as with anything else, the magic didn’t last long.

When I first started, I was overwhelmed by the insane amounts of ornaments we had in the store. It took me a solid month to feel 75% confident that I wasn’t leading a customer astray when I pointed out where the ice cream sundae or the blowfish ornaments were (yes, those are real). The easiest way to figure out which ornament belonged to which tree was to collect all the stragglers (ornaments lying on the ground, ornaments thrown in random corners, ornaments left behind the cash registers, ornaments clearly slung on the wrong trees i.e. a fishing pole on a New York City-themed tree) at the end of a night shift and go on a scavenger hunt to see if you could find an ornament’s match. It was always a challenge, and this was my favorite part of the job probably because I was actually getting some brain exercise.

After only a few weeks of working there, I realized there were two types of customers who came to Holiday Lane. First, there were the overly enthusiastic tourists, who often came in large, happy groups. School groups, church groups, retirement groups… all the groups. Most groupies grabbed a Statue of Liberty ornament to show the folks back home. Some of them splurged and bought an overpriced Thanksgiving Day Parade snow globe or a stuffed bear in a Macy’s sweater. The majority of the tourists were so overwhelmed and in awe of everything about Holiday Lane—the Santa dolls that came in various ethnicities, the fact that 90% of the stuff we sold had glitter on it, the idea that a place like this even existed before Halloween.

Along with the tourists also came their kids, who, for the most part, were excited that Christmas was everywhere, and the fact that we had stuffed animals by the cash register that danced and sang Christmas tunes (a true nightmare for me and any employee). Occasionally, we’d have a bull-in-china-shop situation where a sugar-hyped kid would try to ride a stuffed dog or decide to test out if the ornaments were really made of glass but, all in all, the children were surprisingly well-behaved or too tired to care about ornaments.

The other type of customer in the store was the rude, annoyed customer who was either from New York and wanting to buy this year’s collectible ornament, or the overly exhausted tourist who was honest to God over all of it (reasonably). They clearly weren’t into the overwhelming holiday cheer and only came to get a Macy’s Thanksgiving Day Parade memento and wanted to get the h*ll back to reality as fast as they could. Once, a customer barked at me because I was taking too long to ring them up (because I was doing them a solid and wrapping their ornament in bubble wrap so it wouldn’t shatter into tiny sad pieces). Or many times, a customer came back to the store with a shattered ornament in hand and blamed me for the poor wrapping job, when they likely just sat on it or something.

There are two questions I never want to hear again. 1. Where’s Santa? Ok, never did I expect to have a job where I’d have to answer that question. Contrary to popular belief, Santa is located on the 8th floor and not in Holiday Lane.  2. “Where are the bathrooms?” Straight to the back in the luggage section or MAYBE TRY READING THE VERY CLEARLY LABELLED SIGNS NEXT TIME?

And speaking of Santa, that guy made my lunch break a nightmare (though I never laid eyes on him personally). He was conveniently located right across from the Au Bon Pain where I would get broccoli and cheddar soup and call my mom to complain about life during every shift.  That café was a hotspot for anyone who needed a snack before, during, or after waiting in line forever for a quick second on Santa’s lap. But by the time December 1 rolled around, it was near impossible to even find a seat, so I had to start eating my lunch in the employee’s locker room like the sad, older ladies who worked at the makeup counters.

The store had a rule that we wouldn’t start playing Christmas music before a certain date because it “upset” people (maybe if you’re upset over Christmas music playing in September you shouldn’t visit the holiday section in September?). Whatever. Instead, they tortured us with some elevator music you’d expect to hear in a Sleepy’s and not the holiday section of a major tourist attraction known for its Christmas spirit. The first day that it was acceptable to play Christmas music (somewhere closer to mid-October, I believe), it was like they said we were all getting free pizza for the rest of the year. Finally, music with words! But that feeling of joy was short-lived. Imagine listening to the same handful of Christmas songs on loop for hours for nearly three months, a third of which were from the Glee Christmas album. At one point, I thought if I heard “Santa Baby” one more time, I might actually lose what inkling of sanity I had left.

When the busy season struck, it struck hard. The few days leading up to the Thanksgiving Day parade were just as chaotic as you might expect them to be. It’s like every high school marching band in the nation was in town and trying to scoop up any item that said “parade” on it. But at least they were friendly about it. As crazy as the store was the day before Thanksgiving, nothing could beat the madness of Black Friday. Obviously, Black Friday is notoriously hellacious at normal shopping centers in America, so it’s probably pointless of me to say it’s hell on steroids at Macy’s.

If you’ve been #blessed enough to avoid Black Friday at Macy’s, you’ve been living life right. Imagine all the worst people you’ve ever met all jacked up on coffee and crammed into the same space furiously flinging products everywhere like it’s a race to see who can find the least ugly sweater. Holiday Lane was no different, except replace sweater with tree skirt and you’ve got it covered.

“Oh this must be such a fun place to work!” is a naïve comment a lot of tourists liked to make during the obligatory small talk stage of me ringing them up. No, actually, it was just like any other retail job except it was making me hate one of my favorite holidays. It was mindless, sparkly work. Ringing up hundreds of individual ornaments can make you feel insane after awhile. And wrapping each ornament in bubble wrap afterward is an anxiety-inducing task because you know the life of the customer’s ornament is ultimately in your hands. You know the customer is watching you intently because they don’t want their precious item to shatter in their suitcase, but your boss also has a strict policy on how much bubble wrap you can use on one customer. And god forbid you accidentally drop and break a customer’s ornament in the process.

You know those crazy people who wish Christmas could last year round? Yeah, I used to be one of those people, but not anymore. I can tell you firsthand that the Christmas spirit is only meant to last for 25 days in December. Christmas songs aren’t meant to be abused. And you should never be exposed to substantial amounts of glittery things for more than a month at a time. By the time December actually rolled around, I was so tired of the idea of Christmas I could have passed for the Grinch himself. Christmas music had no place in my life outside of Holiday Lane. I didn’t bother getting a Christmas tree of my own that year. I barely even felt like shopping for family (something I had always enjoyed) because it felt too much like work. I was the Scrooge I never wanted to be. I was a Krank. I wanted to break up with Christmas forever.

But the job was only seasonal, and now, two years later, I’m pleased to report that my Grinchy side is gone. Christmas is back to being one of my favorite holidays, and all is right in the universe. Looking back on the job, I know it wasn’t all bad. I made money without selling my soul on the subway, I met some great people, and I learned a thing or two about Holiday collectibles and how to act friendly even when you want to chop someone’s head off with a shattered ornament.

Just the other day, I passed Macy’s, looking more glittered up and festive than I ever remembered it. I considered heading up to Holiday Lane for old time’s sake to see what had changed, and to see if they had any new weird ornaments like a glittery iPad or Kim’s Paper magazine cover. But the store looked too crowded (what’s new), and I felt oddly nervous, like stepping back in there would instantly bring back all of those feelings of Christmas loathing, so I kept walking. Who knows if I’ll ever step foot back into Holiday Lane, but, for now, I’m more than happy buying basic Christmas ornaments at Target.

Tags: Holidays, Macy's
About the Author