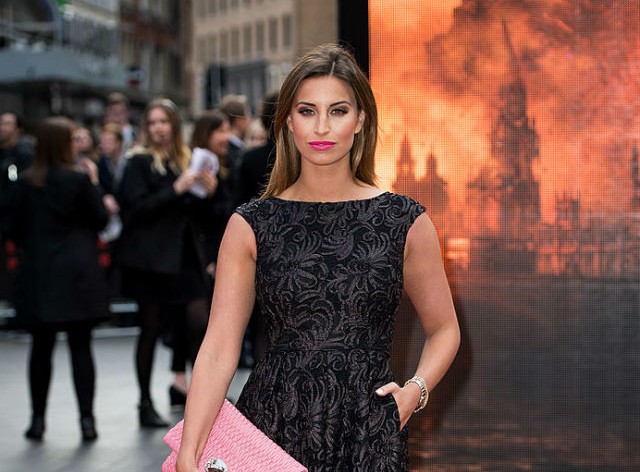 Hey Ferne McCann, You Can’t Preach Natural Beauty If You Still Fake Your Selfies
by Eliza Dillard | December 23, 2015 at 2:22 PM

British actress Ferne McCann wants everyone to know that she’s all about encouraging and supporting natural beauty on social media, but that doesn’t mean she’s deleting FaceTune any time soon.

In a chat with Mirror, McCann addressed Photoshop backlash she received after she posed in lingerie for a Caprice campaign. McCann acknowledged that, yes, her body was retouched int he image. She said, “In a campaign, that picture is the brand’s baby. They want it to look perfect, just like if you’re painting a picture. All pictures get retouched. I’m aware of that and I thought everyone else was as well.” So, every brand is screwed up. Glad she cleared that up for us.

But she took it a bit further and tried to really be an advocate for unretouched photos. She said, “I always promote being natural and embracing what you’ve got.” and “Don’t get down about comparing yourself to models on social media. I want girls to realise that Instagram isn’t real. Maybe I need to do a campaign. It gets me down, girls looking so perfect.” We’re totally on board with that message, and we know apps like FaceTune are so simple to use, even a female chimpanzee could make her selfie look like Sarah Jessica Parker.

But here’s where McCann’s argument plummeted. Despite declaring herself the head cheerleader for natural beauty, she admits that she still enjoys a good face tuneup. She said, “It’s mental with Facetune. I’m partial to using Facetune. Celebrities that say they don’t are liars. It’s a personal thing. I might want to smooth a bit of my skin. But it becomes obsessive. It’s worrying.” It’s cool, though, because her fans have seen her on TV without makeup in I’m a Celebrity, so she gets a free pass.

Sorry, but we’re not buying that. If you want to be a supporter of natural beauty, be our guest. Preach about it until your face falls off, but don’t expect us to take you seriously when you’ve outright admitted that you still use the flaw-correcting apps you’re supposedly so against. That’s like saying you’re a vegetarian, but you still eat chicken fingers when you’re drunk. It’s not legit.

“Personal thing” or not, if McCann wants to be a decent role model for women, she’s gonna need to step up her game and delete the app to show girls that even celebrities can exist without FaceTune. Maybe then we’ll throw some support to a McCann campaign.

Tags: Photoshop, Selfies
About the Author