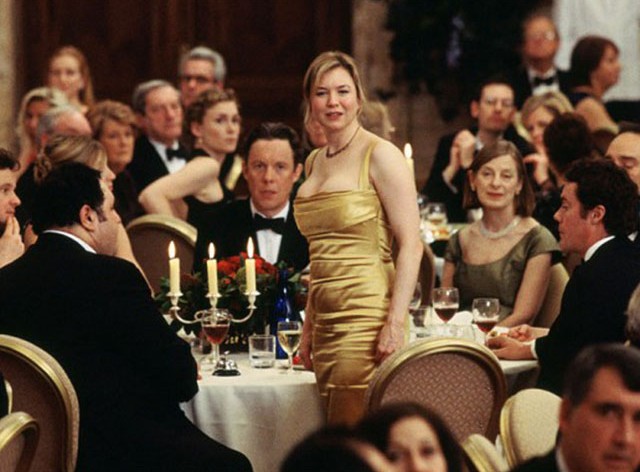 Perhaps you heard Bridget Jones (Renee Zellweger) is making a baby in a third movie, and….now look at her, she’s still totally clueless about life, but she’s slimmer.

People were upset, so the director Sharon Maguire told Entertainment Weekly this:

“We all really loved the notion that Bridget, 15 years on, had finally reached her ideal weight … somewhere between a UK size 10 or 12 … but still hadn’t solved any of her issues about love and loneliness. I think that one of the reasons the first film worked was not just because of the comedy but because people identified with Bridget’s fear of loneliness. It’s a universal fear. It’s still a prominent theme in the character’s journey even in the third film, and an integral point of access for the audience to empathize with Bridget.”

And is this the happy ending to this hot mess triathalon we all dreamed of? (Disclaimer: Hot mess=woman who just can’t get it right regardless of the size of her granny panties.)

Look, we get that fake people do whatever scripts tell them to do. We totally believe that characters can slim down as they have epiphanies along the loop de loop known as life. But hold up, we need to talk about this defense because we kind of hate everything about it. We’ll take it nice and slow though because there’s more “body stuff” to unpack from the Bridget Jones franchise than Andre Leon Talley’s carrying case. 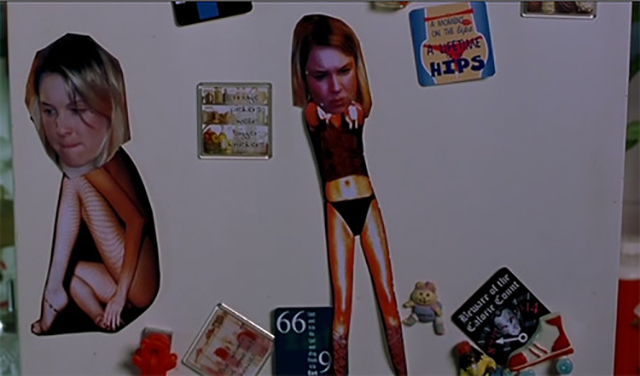 Just being realistic and healthy and all.

For starters, we didn’t need the reminder of what a “standard” size is because Bridget Jones was pretty relatable to begin with when she weighed more. But of course with Miss Jones, there was always a lot of self-internalized hate. When we met her character, 140 pounds was not her ideal weight. Her ideal weight was probably closer to the slim model shapes she tacked to her refrigerator with her head stuck on them so that she could avoid eating. But the director has wisely put some numbers on it (Note: a 10-12 across the pond from us is a 6-8 in the U.S.), so let’s go with that. And then came that cliche, Mark Darcy (Colin Firth), who loved her squidgy bits even though she was ashamed of them. EVERYTHING WAS OKAY YOU GUYS. She was allowed to feel the desirous eyes of a man even though she wanted to be thinner.

But now, already our first foray into the film has an unwaveringly weird comment. One thing that’s silly is that he says her weight is no longer an “issue.” People at healthy weights of all sizes in fact do find that weight IS an issue. Doesn’t this sound like an ad man trying to sell you invisible miracle tablets that give you the arm pits of Megan Fox? Look at her breezing along on her surf board, her weight but a faint issue in her past. Her world is now wonderfully unmarred by food issues and any number of self-image issues that relate to most women. Pass. And don’t act like the title role isn’t played by an incredible actress who the media has had a field day with over her image. (She said she didn’t care this week, by the way.)

His comments suggest that Bridget, who was relatable for both her body image issues and her loneliness, has improved. It sounds like this guy is saying she tapped into the secret thinspo power that makes her more interesting to more people, and then like magic, she’s reappearing as thinner. This takes work, it’s not always what every woman wants, and there’s more ‘splaining to do on this. Now that it’s time for her to squeeze out a baby whose awesomeness will be guaranteed because Bridget has had some triumphant moments, she’s “standard” thin? Score another one for the health monitors! Even Bridget’s got her butt in gear.

If the movie shows the fun dignity-shattering weight loss experience when everyone suddenly acts like you won a Nobel Peace Price because you lost weight, then that could be cool. But no, we don’t care for this idea that the “tragedy” of her being 140 is all over now. She looked hot then, particularly as an awkward party guest in a bunny costume. So it’s like we’re being sold something rather sour.

It’s hard not to feel annoyed for the old Bridget Jones either. She would probably hate this especially because not one but two universally adored British dudes took one look at her at her old weight and said I WANT THAT.

Tags: Bridget Jones
About the Author