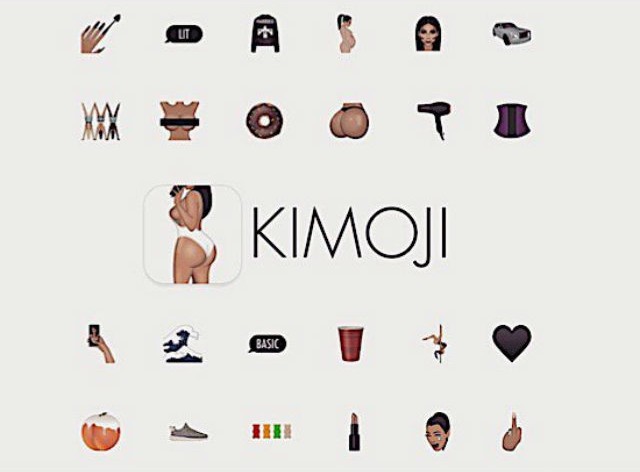 Kim Kardashian’s Emojis Are the Body Positive Boost I Never Knew I Needed
by Eliza Dillard | December 22, 2015 at 12:08 PM

Okay, so I caved and downloaded Kim Kardashian‘s Kimoji app this morning after I heard that she broke the App Store. Like, what kind of power move is that? So go ahead and laugh at me for donating $1.99 to the Kardashian Kristmas fund… I’m laughing at myself too. But I had to see what these guys were all about. I never had any intentions of using them in a serious, day-to-day conversation, but that $1.99 would surely pay off in laughs I assumed.

I was right about that. The Kimojis are hilarious, a bit over-the-top, and slightly NSFW. They’re exactly what you’d expect from anything with the Kardashian stamp. There’s a Cartier bracelet, a crown, your garden variety of luxury vehicles that you’ve seen Kylie driving on Snapchat, and an outstretched hand taking a selfie. There’s also bacon, an entire pizza (because who wants just one slice?) waffles, and milk jugs because Kim does like to keep it real in the food department and eat KFC before a naked shoot.

But that aside, I was actually pleasantly surprised by how body positive the emojis are. There’s a pregnant Kim cradling her baby bump, a closeup of a curvy bottom, boobs in a sports bra, boobs in a regular bra, curvy bodies in one pieces, and curvy bodies doing handstands just to name a handful. Most of the bodies are headless and, sure, we know they’re based off of Kim and her ultra-fabulous life, but the omission of heads really allows users to believe that this babe with side-boob and curves in a one-piece could be anybody. 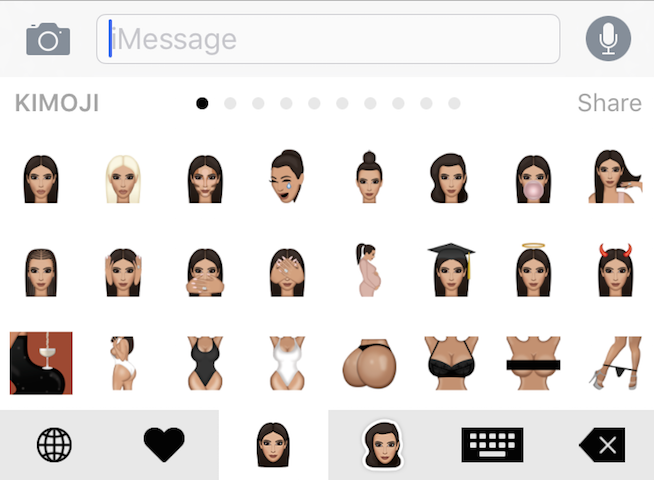 Emojis and diversity have never been synonymous, and that’s where I think the Kimojis are doing some good work. Maybe it was unintentional and just another strict business move to take over the world, but the Kimojis are spicing up body diversity in the emoji-scape, which is pretty cool. Kim didn’t HAVE to make her curves one of the selling points of this app… she could have gone into this lucrative side project with the idea of making her emoji avatars as straight-sized as the App store would allow. But instead, she uses Kimoji as a tool to make curvy bodies relevant and glamorous. Now, instead of a straight size woman doing the salsa, you can use a Kim emoji doing a handstand in jean shorts with her curves clearly outlined when you want to show your friends just how excited you are to take a champagne shower on NYE.

Of course, it’s still just one body type that she’s promoting, but it’s more body diversity nonetheless. We know the curvy Kim Kardashian silhouette has been dubbed one of the few that’s cool to promote, but it still feels like a win. Despite having her curves approved by Vogue, Kim still gets a lot of flack for her body, and she’s constantly forced to defend her curves against the mean-spirited media and Internet trolls who want to egg her life. Proving she loves her body through something as silly and slightly lame as emojis based on her life sends a powerful statement to everyone who’s ever compared her to a centaur.

I may not love her obsession with selfies, her outrageously expensive holiday gift guides, or the fact that her toddler daughter is cooler than I’ll ever be, but these Kimojis are making a serious case for Kim being a kind of cool human. I guess I won’t delete them immediately.