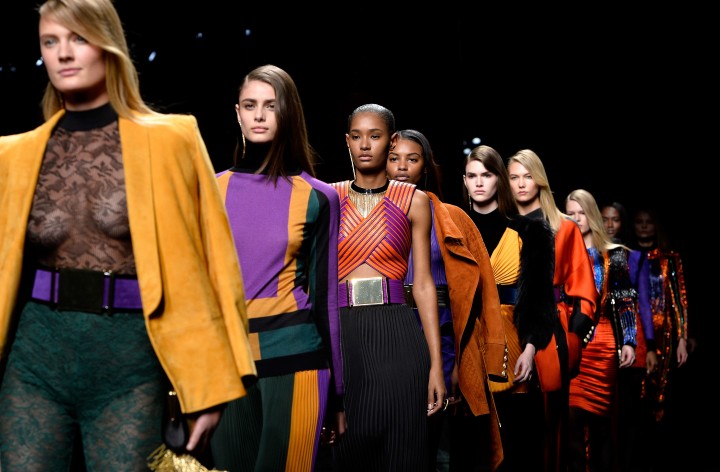 Designers Are to Blame For Size Standards in the Modeling Industry Too
by Ashley Hoffman | December 21, 2015 at 2:14 PM

France’s well-intentioned but questionable weight ban was voted in by France’s National Assembly deputies on Thursday night, according to Women’s Wear Daily.

You guys! All those awful models aren’t going to be allowed to poison everyone’s minds with their thinspo anymore because of the new health requirements. Under this legislation, models who want to work will have to hand over a medical certificate proving their BMI is “appropriate” for their dimensions. It’s an awful lot to hang on just the models. The more we read about this, the more we think, this ban is dumping all the models into two categories:

1) ones that promote thinness with their unhealthy choices

2) ones that promote health with their pre-approved BMI’s.

The French National Authority for Health came up with the specifics for this legislation, but the guidelines don’t seem to mention designers in any of this. We all know that a BMI can determine health on planet earth as well as your uncle can determine your taste in sweater vests. A single number or even a range doesn’t begin to account for the delightful cornucopia of body types and lifestyles. That’s one reason this doesn’t sound like the most informed policy.

But who is telling models they need to be THIS THIN to ride, anyway? What about the designers who actually make the short shorts in the smallest of samples sizes? Where are they in this rescue mission? The brands that determine the size of the hot new caped rompers they show should be held accountable too. They, along with the agencies, advertisers, and everyone who demands models size down or find work doing hula hoop informercials or something are in this also.

Parisian stylist Simon Gensowski told Women’s Wear Daily, “I think this law goes into the wrong direction, rather than body-shaming women with eating disorders, it would have been wise to reconsider current sample sizes.” That’s apt.

This idea that models are actively whittling themselves down in their hopeless attempt to make little girls see the light about how being slim is tops is ridiculous. Models — the ones who aren’t naturally slim of which there are countless — do it because they are told they had better be slim enough to wear the clothes. Thanks to models leaving in a blaze of glory with open letters, we see that agencies are actually quite opaque about telling models they had better lose weight or else. Most models are young, some of them don’t speak the same language as their employers, but they’re constantly reminded that they’re supposed to fit in, and it’s other people who dictate what fitting in means.

Now, France is giving the models yet another set of strict limitations to abide by. Fining agencies for their requirements might be a start to making their restrictions on thighs less profitable. One other thing that might be an admirable start is that French deputies said that digitally sized up or down advertisements will have to have a “retouched photograph” mention. But making models weigh in probably won’t miraculously make the image of women healthier.

Why not put some pressure on designers to show clothes in a wider variety of sizes in their shows? Not one size requirement, but a variety? Like, ones with places for thighs and boobs in addition to smaller sizes? In order to accommodate more women, it’s the high fashion clothes that need an update. The limited clothing sizes perpetuate this kind of abusive weight policing. When it comes to a health initiative, it seems shortsighted to leave out the designers setting the standards.

Until designers show clothes in more sizes on the runway, we won’t have more different looking models hired to wear them. There may not be a statute for this. It’s just common sense.