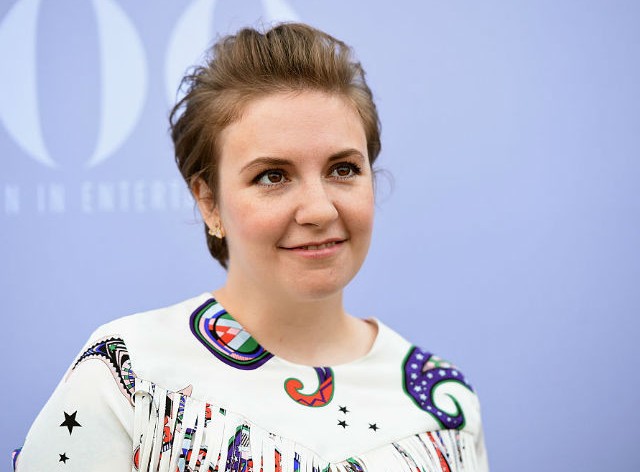 The Internet Needs More Videos Like Lena Dunham Dancing in a Skintight Bodysuit
by Eliza Dillard | December 17, 2015 at 3:30 PM

Whether you love her or think she’s more annoying than your mom when she buys the same sweater as you, it’s hard to argue with the fact that Lena Dunham knows some things about body positivity. She isn’t afraid to get naked on Girls, she posed in a crop top for a major magazine spread, and here she is, giving Instagram a bath in a salmon-colored, skintight bodysuit and doing the shimmy.

Too proud of my moves not to share this special GIF @jackantonoff made ????

For a lot of curvier celebs, posting something like this to Instagram would probably be as appealing as sticking their heads in a toilet bowl. You don’t need me to tell you that the Internet is a dark, scary place where even the nicest people get chewed up, swallowed, and regurgitated faster than you could sniff a Gingerbread cookie candle. And obviously Dunham’s little jig got its fair share of mean-spirited comments from Instagrammers.  @thehairpainter said “@theredchinese I just projectile vomit across the room thanks for ruining my lunch!” and @richardrodriguez said “@andrrrrea my morning is ruined,” just to give you a taste. There were a lot of hurtful adjectives that don’t need repeating. People said it was “too much.” But I think it’s barely enough. I saw this video and smiled like Kevin McCallister both times he realized he was about to have Christmas without his family. This is exactly the kind of stuff the Internet needs more of.

I’m not a die-hard Dunham fan. I haven’t read her book, I’m not a religious Girls watcher, and I laugh at only a percentage of her jokes. But this video is cool, like the time she accidentally stepped on my foot at a crosswalk and apologized (I assumed she wouldn’t since she was “trending”).  We usually think of Dunham when we try to recall the very short list of curvy celebrities who get some face time in magazines. Her body is one that the media constantly scrutinizes and labels as “imperfect,” which is what makes this video so great.

The video is no doubt silly in nature, and it’s easy to write it off as Lena being Lena. But it’s also really important because these are the types of bodies we’re constantly told shouldn’t exist in skintight bodysuits. And not only is she in one, but she’s moving and grooving and letting us see all of her (what society would call) “imperfections,” and that’s powerful stuff.

This is the kind of material I log into Instagram for. This video makes every avocado toast or sunset picture I’ve ever had to scroll through worth it. Never stop awkward dancing, Lena.