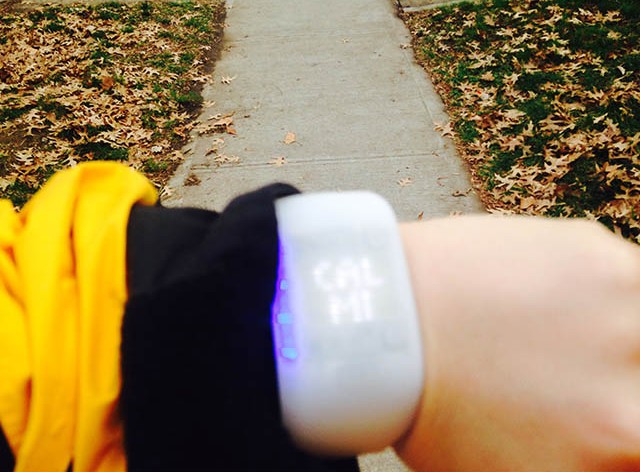 I Wore the adidas Fitness Tracker and It Made Running Less Boring
by Ashley Hoffman | December 15, 2015 at 8:46 AM

I’m jogging in Prospect Park doing my best impersonation of a woman who’s GOT IT TOGETHER, and this flashing thing on my wrist is supposed to coach me to run farther and faster. It’s called micoach, and it’s from the same innovative style HQ that gave you Yeezy bodystockings, adidas. Now they’ve designed a striking $150 wristwatch that’s supposed to measure how much you’re crushing it with your workouts.

Before I got here, a woman’s voice purred from my phone in a tone that disarmed me to say that the GPS has found me. My boyfriend asks me, “Are you becoming a cyborg?” Technically, I’m still human, but now every move I make is jacked into the mainframe on my phone because I have the micoach.

For me, running usually goes from empowering to boring and drops me right off at sweaty hot mess at warp speed, but now I have a sexy contraption to hold me accountable for the lack of movement in my workday. According to Stacey Burr, GM of adidas Digital Sports, “It’s making sure you avoid extended periods of inactivity and keep moving throughout the day.”

Like my father, this wearable is technically German, and they’re both coaches. Before my militaristic NCAA Division 1 champ turned coach stopped having a pulse (cancer), he would make me do two-a-day workouts on the weekends. Whenever we’d drive by some young Alpha male jogging in short shorts, he’d scream out the window “pick it up.” Without him, when it comes to working out myself in the winter, I usually go with my exerting sit-on-the-couch-and-surf-Twitter-while-life-passes-me-by routine. So I’ve replaced my no-nonsense Champion socks wearing coach dad with actual trainers at Crunch.

I’m on my third actual trainer, a Bensonhurst boxer Fredo-lookalike named Tino who gives me the pound a lot. He usually tells me when various moves will make me look “nice and small in the waist.” I just nod and smile because I don’t want to talk about feminism all the time. But now I have a more important me generation goal: self-knowledge that doesn’t involve a scale from 1980. I got a watch. Before I could get it to sync, the adidas micoach app was already getting all my DAD on me, noticing I had done nothing. (It wasn’t hooked up yet.)

I think that most smartwatches and wearables are a quick way to reach maximum douchebag levels and convince the world you’re a virgin, but of all the countless wearable thingamabobs I’ve seen, this was irresistible. The screen is a sexy white, and the stats (calories burned, steps clocked, pace,) just glow a white hot glow. So I’d want to wear it if it didn’t do anything. But it does good things like tracks your heart rate with a pixelated tamagotchi-ish heart. The rubber wears super comfortably. One drawback: I didn’t need all of the modes it has, and I could have used buttons that were easier to navigate, but I’m impatient.

The commercial for it features an impressive career city woman who has obviously mastered every aspect of her life including taking enough steps to be a total hammer. With every swift step, I imagine myself scaling the stairs to the top of the world just like her, but to the tiny children I’m beating at life in the park, I probably look like I’m wounded and running away from a bunch of Santacon people.

How’d I do according to the micoach? Looking over the data after a week on the readable app, it actually gave me the feedback I wanted, and it was so much less pricey than a trainer. Tino’s workouts were harder than what I willed myself to do, sure, but I was dripping with sweat every time, and I had the stats to prove it forever.

I see I was pretty eager to please my fake coach even without dad’s approval. Because it coached me, I did 8.1 miles and burned 2,985 calories. Having these numbers makes me feel less guilty about my current activity level according to the watch: “chilled.” But even with the app’s nudges, it didn’t make me feel guilty, it made me feel informed.

Now I don’t want to work out without this thing on me because I want credit for every heroic moment when I lift my feet and do anything requiring effort. It does let you share your workouts with a “nothing can stop me!” social media post that clues everyone into how great you look, but I won’t be doing that because I only share pictures of foods and vistas.

I have the occasional desire to melt my iPhone down in boiling water, but this might be a reason to keep it on. It flashes a cool green when I take it off like my mind is being controlled because I’m in a sci fi movie about self-improvement, and I love it. I’m a major proponent of being able to look back on your own data. I like to know what I did, and what I didn’t do, and now I have it on a chart. Plus, it looks cool.

Tags: Adidas, Exercise
About the Author