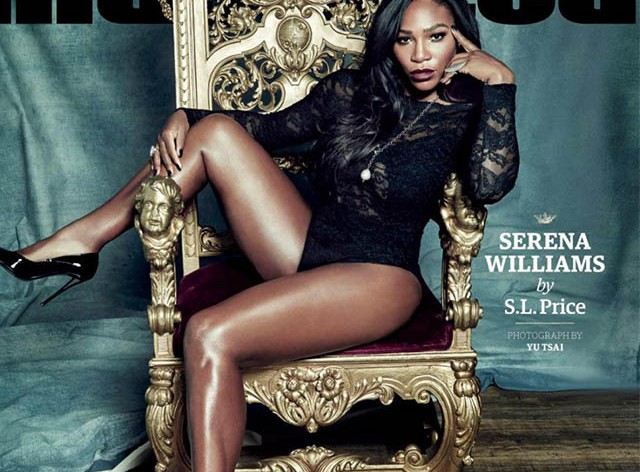 This Serena Williams Sports Illustrated Cover Is the Smartest One Yet
by Ashley Hoffman | December 14, 2015 at 11:53 AM

Sports Illustrated could have let magazine cover resident badass Serena Williams just give them an action shot in which her face is all scrunched and she has a death grip on her tennis racket. But instead, appropriately, she’s reigning on her throne with her legs wide the hell open.

The zero screws given stare, the bodycon suit, the deep red lips. So much slayage. This is the sexiest thing Sports Illustrated has ever given women. It’s strong. Because Kate Upton’s zero gravity boobs scenario, art-directed by a woman, weren’t really doing it for us. (She’s the first woman since Mary Decker in 1983 to be the sportsperson of the year even though the people’s choice was a horse LOL.) In this gem of a long-form profile she contemplates the subject of n-word spewing people in the crowds, and how she dealt with it..like a queen who would do this pose.

It’s a pretty BFD to see a woman harnessing her sexuality like a boss instead of grinning like a daft bird on this magazine. A+.