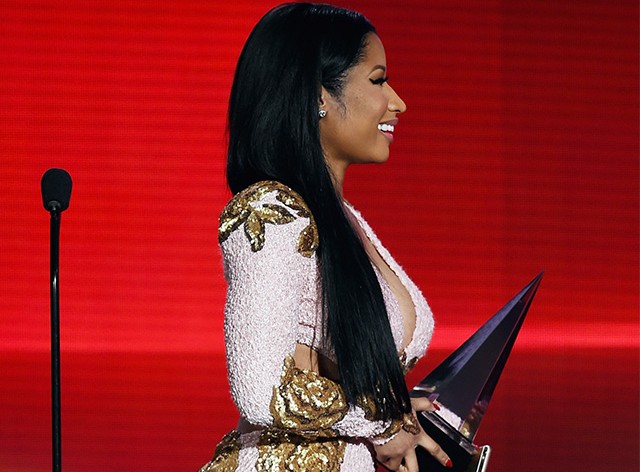 Why Nicki Minaj Needed to Fire Back at Ridiculous Fake Butt Conspiracy Theorizing
by Ashley Hoffman | December 14, 2015 at 9:32 AM

“Don’t worry bout if my butt fake,” was already a line on her song “Only,” but Nicki Minaj is saying it again to Bossip, that creepy site that popularized a string of tweets alleging that Nicki Minaj is famous because she paid someone to inject her tush with more tush.

She may never actually settle the score for women who are clearly successful regardless of where cushion is deposited on their bodies, but thank goodness she addressed this latest nonsense. It went down like this:

Bossip retweeted this, “yep men are visual creatures they don’t care if you can sing…that’s why nicki had to buy an a** to blow up!” And Nicki came back with much common sense, including this: “To imply someone’s a** is the reason they get on tracks and hold their own with every great MC who is still alive black ppl, do better lol.”

Pretending an unstoppable force of a fire-spitter is getting her life because she paid for all that booty speaks volumes about the fear associated with a woman who takes up space. (It’s important that she’s here, for more on this, see our interview with Lizzo.) The sneaking suspicion that she could only propel that success forward with a butt that men like is not insignificant.

We know. Haters are crazy, and they could tell you which celebrities bought their boobs and bums all day. It’s just an unfortunate event famous women deal with all the time, like having to avoid showing you how they really feel about boob tape on the red carpet. But to suggest her body is so outlandish that it has to be cartoonish plastic surgery is reason enough for Nicki Minaj to snap back at the people spewing this wacko routine.

Publicly making it very clear that this is outrageous to the point of comedy is a task that is undoubtedly difficult to pull off when the media still calls a Nicki Minaj inconvenience a “feud.” It’s not. Nicki Minaj had to say something about it when a news(ish) site thinks some rando saying she made it because men are into her butt is hilarious. She needed to speak up because it’s the only way to ensure the littles on the internet realize she earned her position.

However nasty and unfounded these juvenile accusations may be, there are deep pockets of sustained prejudice against women who have fuller figures happening here, as well as a fear of women of any size. Obviously the internet is a sewer of toxicity against anyone with a shred of an achievement, but these symptoms crop up when a woman of size does anything, and Bossip is forwarding this thinking? No one in the “media” should be targeting a woman who still has to defend her body. Silly people, still thinking they can bring down a world-runner who laughs at her own cookie metaphors in Paris with Beyonce by deploying some good old body shame.

Let’s retire this narrative of butt-secured fame, shall we?