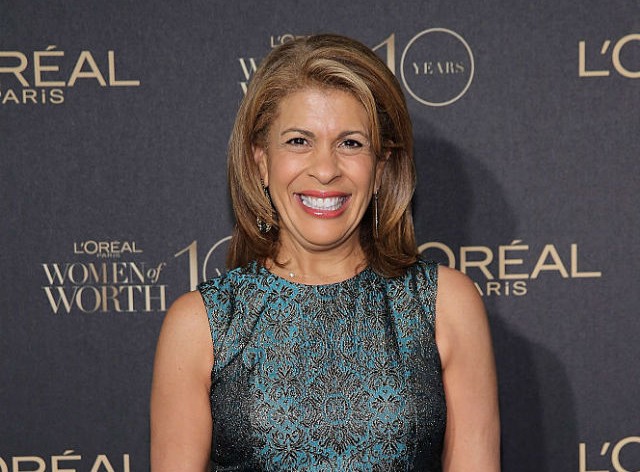 On a segment for the Today show hitting us with some feel-good reasons why the fashion industry should “drop the plus” and replace it with a more “positive” yet still exclusionary term i.e. “curve,” co-host Hoda Kotb dug herself a hole with some hopefully wine-infused commentary.

The segment highlighted issues with the term “plus size” and noted that it’s important for women to feel good about themselves. The term “curve,” they say, promotes a more positive message than “plus.” We’re not here to duke that one out. Hoda seemed all “preach, sister,” and even made it clear she agrees with Kylie Jenner’s BFF and ‘curve’ model Jordyn Woods that models should just be called models. To show her support, though, she asked all of the female hosts to raise their right arms and, just when you thought they were about to recite the pledge of allegiance or, you know, swear to only refer to models as “models,” Hoda makes a joke out of left field about how they should all shake their arm fat.  “We all have issues, it doesn’t matter,” she laughs at her jiggling arms.  The ladies then argue over which of them actually has batwings or not. It was all really happy fun at the expense of adding fuel to the body image fire.

We know it must be hard to be a talk show host and not say completely off-the-wall things in front of millions of people before noon, but come on, Hoda. For a segment trying to raise awareness on the need for body diversity and how a single term can help women feel better about themselves, the batwing “issue” had no place in her commentary. It’s only reinforcing the idea that we need to pick apart our bodies and take issue with normal, natural things like arm fat, and we’re not here for it.

To shake things up even more, Hoda let us know that “curve” is a sexier word than “plus size.” “Curve sounds like that,” she says, while making a wonderful hand gesture to emphasize “that” meant the all-too-familiar hourglass figure. With a flick of her wrists, Hoda excluded differing body types from falling under the label of ‘curve,’ so that’s cool, too.

We’re thrilled that these conversations are happening. The fact that Today even took the time to talk about curve models when the world is falling apart and the Kardashians are popping out saints is encouraging, but we wish Hoda would get a clue to the messages she’s sending and the ideas she’s reinforcing with her “jokes.” We’re gonna open a bottle of Chardonnay on that note.

Check out the video below and let us know what you think.